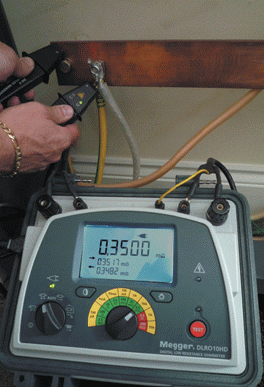 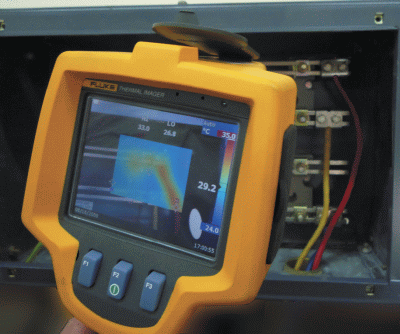 Low resistance measurement is a well established technique that can be used in a diverse range of applications where electrical conductivity is important. However, thermal imaging has been proposed as a simple and effective solution in many of the same applications – but is it? Megger investigate

The fact is that both low resistance testing and thermal imaging have their place, so in order to establish which technique to use where, the pros and cons of each need to be examined more closely.

Crucially, low resistance testing can detect problems even when there is no current (other than the test current) flowing in the object under test. This makes it well suited for applications such as checking weld quality, verifying the performance of lightning protection bonds, confirming the integrity of aircraft structures and testing earth systems.

Low resistance testing is also suitable in manufacturing applications, particularly where it is necessary to test sub-assemblies rather than complete systems, and for checking new or modified electrical installations prior to energisation. Low resistance testing also provides straightforward numerical results, which can easily be recorded and, even more useful, trended as part of a predictive maintenance programme.

This technique is a good way of checking for overloads and unbalanced loads, which can’t be done with a low resistance tester. Thermal imagers also have non-electrical applications, such as finding the locations of heat loss from buildings, and detecting mechanical faults such as worn bearings in a motor, which heat up because of excessive friction.

Thermal imaging also has the reputation of being easy to use, but it is important that the operator understands what they are seeing and is able to interpret the results. For example, is a transformer overheating, or is it at its normal operating temperature? What is the load on the equipment while the test is being carried out? At what point does the temperature rise become a problem?

In high voltage environments, such as an electrical substation, a further complication is that it is often not safe to get close enough to the equipment to image it clearly. In addition, items such as fuses and circuit breakers are usually mounted in metal enclosures, and thermal imaging will not work through metal.

It is often unsafe to remove covers or open doors with the supply switched on, and by the time the supply is isolated and the covers removed, the equipment will have cooled significantly, making the thermal imaging data of dubious value.

It can also be difficult to accurately relate the thermal image to the equipment being evaluated, and it is sometimes necessary to take a normal digital photograph and then use a PC to overlay this with the thermal data. Finally, trending thermal images to identify changes over time is not particularly straightforward.

Due care and attention

For example, it is all too easy to make an accidental connection to a live supply when attempting to carry out low resistance tests, particularly when testing busbar bonds and battery straps in UPS installations. It is important, therefore, that the instrument is suitably protected.

In many test sets, this protection is provided by a fuse, but this is not particularly convenient as, if a suitable replacement is not to hand, the instrument is not useable until a replacement can be obtained. Better low resistance testers are intrinsically protected against connection to live supplies. With these instruments, it’s possible to carry on testing normally as soon as the errant supply has been properly isolated.

It is also important to select an instrument that can supply a test current appropriate to the application – ideally, it should offer a choice of test currents covering a wide range. This is because high test currents can, in some cases, cause unwanted heating of the test piece, while in other cases the heating caused by high currents is actually desirable, as it can help to reveal weaknesses such as broken strands in a multi-core cable.

Similarly, the usefulness of low test currents is also dependent on the application. Low currents may be a problem in some circumstances, whereas in others this may be a benefit.

In addition, a low test current combined with test current reversal may eliminate the need for temperature compensation of the results, and it also has the benefit of extending battery life in portable instruments.

Finally, ease of use is a crucial factor. For maximum convenience in day to day use, the test set should have an intuitive user interface, and it should perform tests quickly and efficiently, otherwise it will rapidly become a constant source of irritation rather than a useful tool.

In conclusion, it’s clear that both thermal imaging and low resistance testing are invaluable techniques and the ideal situation is to have access to test equipment for both. Only then can you be absolutely certain of providing a definitive answer to the question that we’ve all, at one time or another, asked – is your resistance low, or are you getting hot?

Megger takes to the road to dispel PAT confusion

Why buy when you can hire?