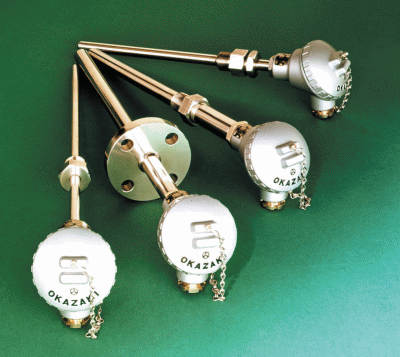 RTDs are similar to thermocouples in that they convert changes in temperature to voltage signals by the measurement of resistance. As an RTD becomes hotter, the resistance measured on its element becomes larger. As the RTD cools, the resistance becomes smaller.

The most commonly used type of RTD element is platinum (often referred to as PRTs or PRT100s), due to the fact that they can be used over a wide range of temperatures and also provide fast response times. Platinum’s coefficient of resistance is almost linear, which means that by using a platinum element, resolutions of +/- 0.1°C or better are possible. PRTs are gradually replacing the use of thermocouples in many industrial applications below 600°C due to their higher accuracy and repeatability.

The current international standard which specifies tolerance, and the temperature to electrical resistance relationship for platinum resistance thermometers is IEC 60751:2008. By far the most common devices used in industry have a nominal resistance of 100 ohms at 0°C, and are called Pt100 sensors (Pt being the chemical symbol for platinum). The sensitivity of a standard 100 ohm sensor is a nominal 0.385 ohm/°C. RTDs with a sensitivity of 0.375 and 0.392 ohm/°C as well as a variety of others are also available.

There are more cost effective elements that can be used in RTDs such as copper and nickel. The advantage here is that the RTD will have a reduced manufacturing cost and will have a lower replacement value. However, the drawback is that these elements have more restrictions on the range over which they can be used due to non-linearities in the resistance versus voltage curve. Also, problems of wire oxidation are known to occur when copper is used as the element.

Why choose an RTD?

One of the technical advantages of using an RTD is that it provides a very stable output for a long period of time and recalibration and accuracy of readings over a relatively narrow temperature range is made easier. When compared to thermocouples, the disadvantages of using RTDs are higher sensitivity to vibration, smaller overall temperature range, and a greater initial cost.

It is recommended that a protective well and terminal head be used to achieve the maximum life from a RTD. The well serves to protect the RTD from damage by the gas or liquid being measured. Protecting wells are typically manufactured in stainless steel, carbon steel, Inconel or cast iron. The wells are designed to operate in temperatures up to 1,100°C.

To eliminate measurement errors, it is necessary to compensate for the length of lead wire used to connect the RTD to the readout. The calculations to correct this are relatively straightforward. Three wire and four wire designs are also available that help to minimise these types of errors.

Platinum RTDs are used for interpolation between the IPTS-68 fixed temperature points of ice and antimony (0°C to 630.74°C). They are generally used where accuracy and stability are most important. OMC’s approach to RTDs will bring +/-0.05° laboratory accuracy to the toughest industrial processes – without any special handling considerations.

OMC has combined the inherent accuracy of a precisely wound platinum resistance element with AeroPak compacted ceramic insulated cable, to produce a sensor that will withstand factory handling, whilst retaining the stability required for today’s precision process control environments.

The response of an OMC RTD is defined by two noticeable characteristics when exposed to an instantaneous (step) change in environment temperature. These are:

Time constant: The time to reach 63.2% of the complete step change in temperature.

Response time: Time to reach within 0.5% of the final temperature in a step change. This is approximately equal to five times the time constant.

The response of a temperature sensor to a step change in environment temperature tends to follow a second order differential equation. However, this is approximate, since if the mass of the sensor is small in relation to the mass of the fluid passing over it (as is the case with a liquid), the response may approach a first order differential equation.

In the last few months, OMC has completed the development of a brand new high temperature platinum resistance thermometer for industrial applications. The new Ceracoil W86 is able to measure high temperatures of up to 660°C using a platinum RTD element.

The demands of exporting to the US