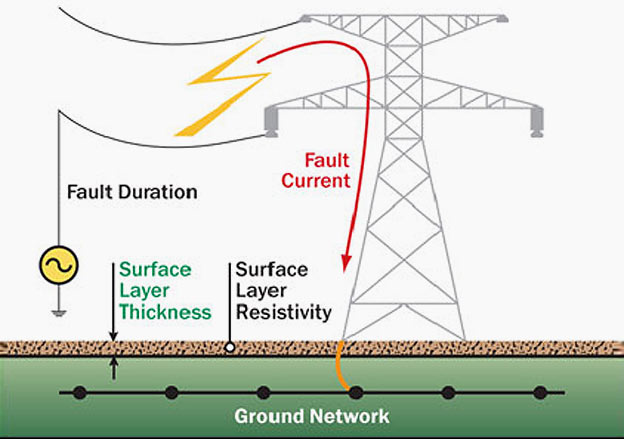 Earthing, or ‘grounding’ an electrical network is an essential safety feature, which can protect equipment from electrical faults and save lives. When live wires touch a grounded metallic section, the brunt of the high voltages is safely directed towards the ground.

1.      As a safety feature for property, equipment and life – An earthed circuit reduces the risk of death or injury by providing an alternate path for current to discharge into the ground. Equipment, appliances and property are protected against faults, leaks and fires resulting from short-circuits and sparking.

2.      Protection against over-voltage – Earthing also provides protection against power surges, accidental connection with high-voltage lines and even lightning strikes, allowing the energy to flow to the ground, with minimal effect.

3.      Voltage Stabilisation – The ground offers a common point of reference for calculating the relationship between different voltage sources. It’s been used as a universal standard since the introduction of the distribution system.

There are two basic methods of earthing used in conventional installations:

One of the conventional methods of installing earthing is to bury a conductive plate in the ground and connect it to the earthing circuitry. The plate is typically installed vertically, edge-wise at a depth of 8 feet, with a galvanized iron (GI) strip running to the surface for connections. The strip typically has a cross section of 50mm X 6mm. The first four feet above the plate is filled with alternating layers of charcoal and salt, to increase conductivity and moisture retention.

The specifications of the plate vary, along with the material:

Another commonly used method for installing a ground connector is to bury a pipe vertically, deep into the ground. A 10 foot long C-class galvanised iron pipe is used as the base of the ground connector, with 75mm GI flanges welded on. The flanges that are used have six holes, which are used for wiring. The area surrounding the pipe is filled with layers of charcoal, salt or an earth reactivation compound.

Constructing and Maintaining an Earth-Pit

Nowadays, earth-pits are the preferred method for earthing, especially for electrical networks. Electricity always follows the path of least resistance, and to divert the maximum current away from a circuit, earthing pits are designed to reduce ground resistance, ideally to 1 ohm. To achieve this:

To connect the earth plate to the surface, two GI strips with a cross section of 30mm X 10mm can be used, but a 2.5” GI pipe with a flange at the top is preferable. Additionally, the top of the pipe can be covered with a T-section, to prevent mud and dust from entering and clogging the pipe. In summer, the pit should be watered to keep it from drying out.

Advantages of the earth-pit method include:

To test the effectiveness of the pit, check that the voltage difference between the pit and the neutral of the mains supply is less than 2 volts. The resistance of the pit should be maintained at under 1 ohm, up to a distance of 15m from the conductor.

The resistance of the earthing system is affected by a variety of factors:

Earth resistance is measured with an earth tester, also called a ‘megger’, which can test the resistance across a range of currents and distances. It consists of a voltage source, ohm-meter to measure resistance and spikes that are staked into the ground for measuring. You can measure the soil resistance using either the 3-point method or the 4-point method.

Jeson Pitt, Online marketing manager, writes on behalf of D&F Liquidators. He constantly shares his thoughts on innovations evolving in the field of electrical engineering, and is committed to helping people with any ‘electrical’ dilemmas or questions.