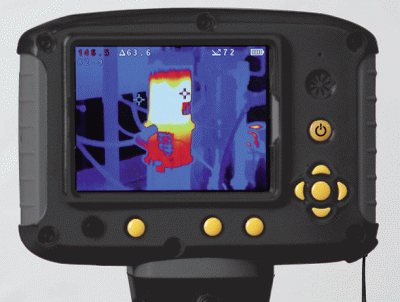 Over recent years the costs associated with using infrared thermography have decreased, making the technology much more financially viable for the detection and monitoring of manufacturing and production equipment. Phil Roberts of IDEAL INDUSTRIES discusses the growth in thermal imaging technology, its role in predictive maintenance and the features to look out for when choosing a device

The fundamental problem with conventional maintenance programmes is that they are generally based on regular, but often arbitrary, scheduled service exercises, meaning that identification of problems only occurs between service intervals after equipment failure has occurred.

However, by using thermography, engineers can perform maintenance on an ongoing basis, and recent technological developments have led to the introduction of a range of handheld equipment which can be used for continuous condition monitoring of critical equipment such as inspect motors, circuit boards, switchgear, electrical connectors, bearings and pumps.

How does thermal imaging work?

Thermal imaging, or infrared thermography, visualises and measures infrared radiation emitted from objects. This technology can therefore be applied in any circumstances where the performance or condition of a component can be revealed by means of a thermal difference.

The amount of infrared radiation emitted by a surface depends on both its temperature and its emissivity. Surfaces that are good reflectors (e.g. polished metal) are poor emitters, and surfaces that are good emitters (e.g. human skin) are poor reflectors. The emissivity of a surface is the ratio of energy radiated by that surface to energy radiated by a black body at the same temperature.

Infrared energy makes up one part of the electromagnetic spectrum. The naked eye cannot see infrared energy because it is emitted from objects as heat, not reflected as light. The hotter an object, the more thermal energy it emits. Infrared thermal imaging cameras are detector and precision optics platforms that provide a visual representation of infrared energy emissions. Where quantitative information is required, the thermal camera can also provide accurate surface temperature values of the object being viewed. The images generated can then be saved for later analysis and report generation.

Electrical parts will emit heat if they are damaged or are about to fail, and a thermal camera can detect any excessive heat in relation to the ambient temperature. For electrical maintenance, thermal imaging technology can help engineers check for loose or overtight connections, identify overloaded components, evaluate uneven voltage distribution and recognise failed or fatigued components within a distribution system without the need to isolate circuits.

Process equipment can also be effectively monitored using thermographic imaging. In fact, temperature control is one of the most important factors in process manufacturing so there is a wide range of applications for thermography across the spectrum of process industries. As well as monitoring standard equipment such as motors, fans and pumps, the thermal imager can be used to monitor the equipment specific to the process itself.

Ease of use makes thermal imaging much more viable for in-house maintenance engineers to carry out ongoing monitoring. As such the technology has become increasingly popular which has in-turn led to a reduction in the cost of thermal imaging equipment. In addition, where once a specialist company would have been employed to carry out formal checks, now engineers can now do it themselves as part of their regular checks for preventative maintenance.

Payback for a thermal imaging tool is also fairly rapid as, in most cases, it would only take the identification of one fault (thus helping to solve the problem before it can escalate into a large scale crisis), for the instrument to pay for itself.

When considering which type of thermal imaging camera to purchase, there are a number of key features to look out for, but primarily the quality of the image should be a major consideration. IDEAL’s HeatSeeker 160, for example, incorporates a 19,200 pixels detector that is fully radiometric, meaning it will capture temperature measurements over the entire image.

Image Fusion lets you view a visible or thermal image of your equipment, or a blend of both. A combination enables the user to get a clear image of the equipment being monitored whilst easily seeing potential faults. The HeatSeeker 160 also features four cursors which are moveable anywhere on the 3.5” LCD screen allowing comparison of components and items in the scene with individual emissivity settings to get a more accurate measure of actual temperatures. By switching on the tracking function, two cursors can be activated to simultaneously find the hottest and coldest points in the image. This function is particularly useful for quick fault finding and takes away any guess work.

Temperature sensitivity is also a key feature to look for when choosing a thermal imaging camera as it can affect the accuracy of the temperature measurements. The industry standard for temperature accuracy is ±2°C and the HeatSeeker also provides a wide temperature range of -10°C to 250°C.

Thermal imaging has become a far more accessible technology which is enabling traditional routine maintenance programmes to be replaced by condition monitoring and predictive maintenance strategies. Thermal imaging is a cost effective tool for maintenance management, bringing benefits that include increased productivity, reduced down-time, and enhanced safety of equipment.