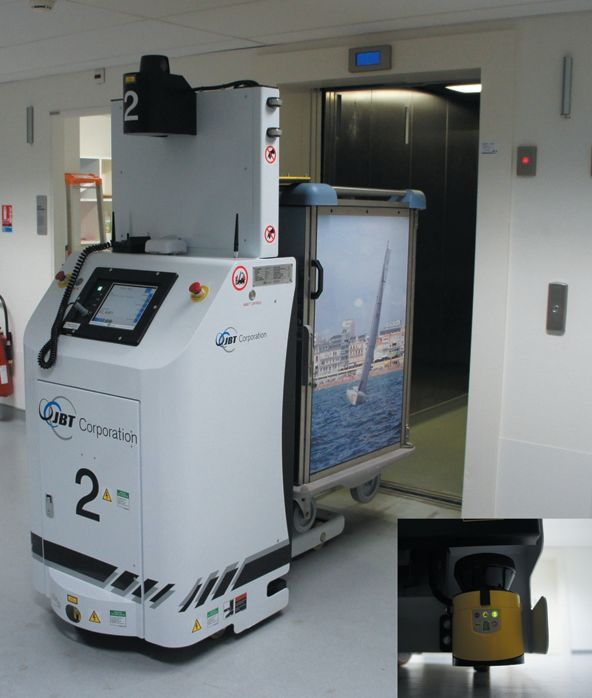 Seb Strutt, senior product manager at SICK UK, discusses the impact of the safety laser scanner in production environments and how it is offering new opportunities to pack a larger punch in ever smaller designs

Few developments within the arena of machine safety have had quite the same impact as the safety laser scanner, and it has created unprecedented new opportunities to protect personnel at affordable costs and, in particular, has offered increased collision protection from driverless guided vehicles. In addition, the technology has enabled the speed and production throughput of vehicles to be dramatically increased, while down-time and vehicle maintenance have been reduced.

More compact safety laser scanners have delivered major advances in the use of automated guided vehicles (AGVs), achieving safe non-contact detection of personnel in the path of  moving vehicles travelling along complex paths and production layouts.

Before the advent of laser techniques, contact bumpers physically detected obstacles by deformation and activated an associated mechanical switch. The approach speed of an AGV had to be limited to the impact force required to activate the collision detection system before it could cause harm.

The introduction of the laser scanner allowed the AGV to travel faster as it was a collision prevention system which could detect oncoming obstacles way before impact. Thus, the AGV could travel faster, increasing its hourly load capacity and ensuring safety.

Laser scanners on mobile vehicles usually have three zones configured to form the field set. If a pedestrian enters the outer zone, a warning alarm may be sounded, in the middle zone the vehicle may decelerate and only in the inner zone would an emergency stop be triggered. The need to stop the vehicle and impact production efficiency is therefore minimised.

Scanners now have detection ranges allowing safety fields of up to seven metres. Multiple fields up to 64 zones can be configured to provide high performance and flexibility for complex vehicle paths as the AGVs turn and change direction to follow their routes.

The ability to integrate laser scanners with other sensing technologies can also be a major advantage. In particular, laser scanners have the ability to safely measure the speed of a vehicle via inputs from encoders fitted to the vehicle. Based on the measurement, the detection field is automatically adjusted.

Such advances have enabled more controlled deceleration of vehicles which has reduced wear and tear on vehicles caused by harsh braking.

As technology has developed, the size and power requirements have reduced allowing application of the technology onto much smaller guided vehicles. The functionality of the scanners has also evolved – even on a small AGV there may be between two and five laser scanners to provide the required protection. This means the complexity of the AGV control system has also increased.

Expertise is required to integrate all the necessary control signals as well as the laser scanner itself, in order to reach the Safety Integrity Level (SIL) required to comply with the essential Health and Safety requirements of such machinery. For a safety slow down and stop function in the direction of travel, the performance level of the stop function should be category 3, PLd.

The complexity of cabling encoders, field switching signals, and safety signals to and from each device could incur significant cost, so the latest developments to technology have focused on integrating complex sensors and safety related controls.

The concept reduces the requirement for ten or more core cables to be connected to each scanner. Instead, a 2-wire network cable is used to control all aspects of the scanner via safe protocols that ensure PLd conformance.

Field switching, control and status signals can be connected centrally to the local Flexi Soft controller. The safety enable function from the Flexi controller is then integrated with the speed and direction control of the AGV to allow intervention during hazardous events.

The performance of the central controller also enables diagnostic functions to be set-up to monitor the system and review any incidents. This concept can also be applied to transfer cars and shuttles as well as complex access control applications where field switching is required. The technology can be applied to new machines as well as for retro-fit to existing machines.

Laser scanning technology is likely to see even more developments in compactness and systems integration, which will make AGVs an ever more common sight, not only in factory environments and warehouses, but in environments such as hospitals, airports or large commercial buildings.