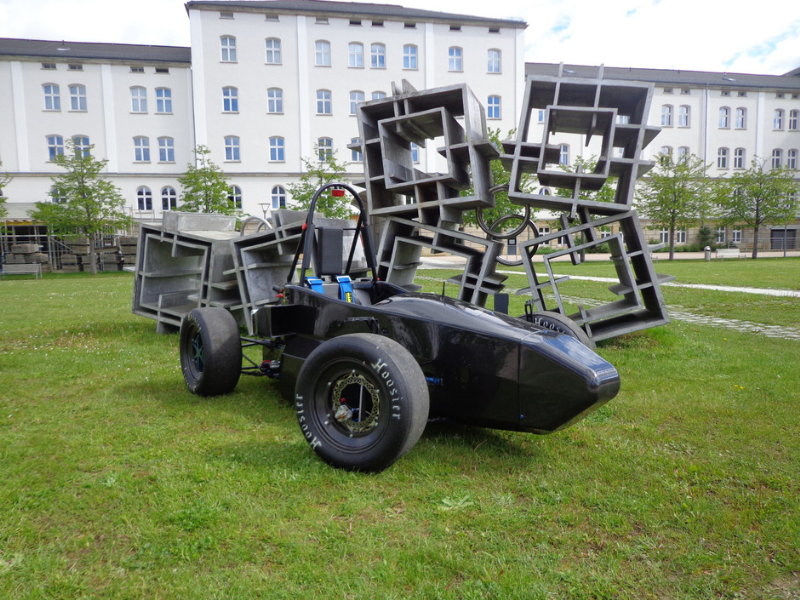 The Formula Student programme attracts students studying a range of disciplines. The aim of the course is to inspire and develop enterprising young engineers. This year, The Running Snail Racing Team from Amberg-Weiden University have taken on a new challenge; developing a winning electrically-powered vehicle. EPLAN Harness proD, a new wire harness tool has been with them all the way.

Formula Student (FS) is Europe’s most established educational motorsport competition, run by the Institution of Mechanical Engineers. The programme provides students with an opportunity to gain invaluable work experience whilst still studying – by taking part in a motorsport project. The goal is to put together a race car within one semester. Captain of The Running Snail team Mr Stefan Dotzler said: “All the faculties from the Amberg-Weiden University are represented in our team – from engineering and electrical engineering right up to marketing and media technology.”

The Running Snail Racing Team has a number of successes under its belt. The first vehicle was so successful that the team received the “Best Newcomer Award” and in 2010, they won the Formula Student Event in Hungary. Project manager Orga Konrad Bittner said: “We are a small university with just 3000 students and this is a massive accomplishment for a university of our size. We are competing against teams from much larger universities who have considerably more support, in terms of both finances and personnel.”

In the current season, the Running Snail Team concentrated for the first time on the electrically-powered version of Formula Student, the FSE (Formula Student Electric). Bittner explained: “This fits in very well with us, because our Faculty of Electrical Engineering and Information Technology places great emphasis on renewable energies. An electric drive naturally reflects the current trends of the automobile industry. Furthermore, we are working much more closely with the Faculty of Electrical Engineering and Information Technology than before. We want to show that electrical drive doesn’t just represent a sacrifice; rather that it is fun and that it fits in with motorsport.”

Thomas Simson, harness module manager, explains the specific requirements of the electrical drive: “There are 212 metres of cable in the new FSE vehicle, which is double the cable that was in last year’s vehicle which had a combustion engine. Around 400 single wires have been installed, which is three times that of last year’s harness.” Alongside the pure drive, the electrical equipment comprises a battery, an inverter and an engine as well as further power units. The battery management is controlled by a microprocessor and it is designed to get the maximum driving power from the batteries; the driver can check the vehicle status by looking at the dashboard. The batteries and the engine are cooled and a variety of sensors collect data; this data ranges from brake pressure and temperature to the range of the spring and the battery status. The regulations also require the installation of an emergency shutdown system and a signal horn.

Simson collected the connections of all these components in EPLAN Harness proD. In February, Running Snail received a licence as well as a 1-day training session to introduce the team members to the software. Simson recounted: “EPLAN Harness proD is largely self-explanatory and it was very easy to begin using it. We began using it straight after the 1-day training session” 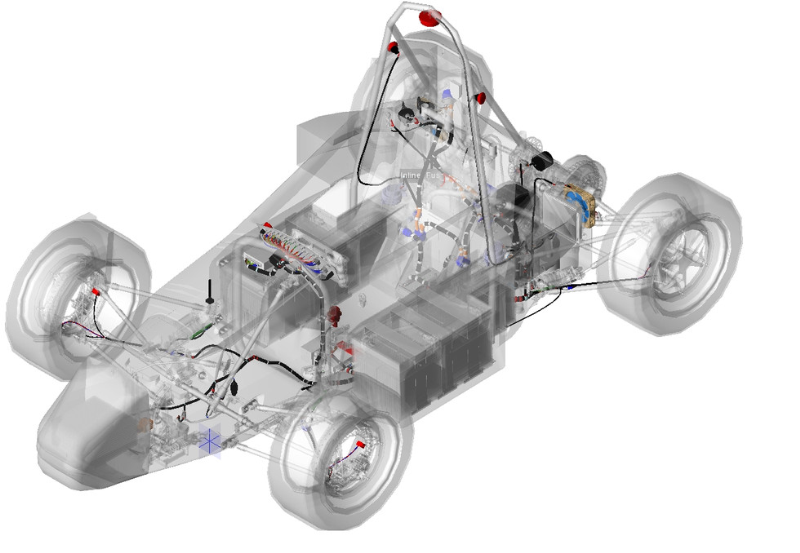 The connectors required are defined first in the Harness proD library. This deals with more than just the connector geometry, as the pin assignment and name of the individual wires are also defined. The software then recognises which pins in which connectors are connected to one another and the wire harness builds itself practically on its own. Simson explained: “We developed the circuit diagram in Eagle. However, the time pressure meant that we could not use the import function of Harness proD. For direct import to take place, the designations of the connectors and the wires must be identical in the libraries of both programs. As the circuit diagram was already finished when we received the EPLAN Harness proD, we performed the transfer manually this year. We want to use the import interface in the next vehicle.”

The students took the 3D geometry of the vehicle along with the position and orientation of the connectors from the 3D CAD system Creo 2.0 with which the racing vehicle was built. EPLAN Harness proD offers interfaces for the most important CAD systems and also for neutral formats such as IGES and STEP. In the software, the single wires can be collected together in a harness and the wire harness can be installed three-dimensionally. When doing so, the software takes note of the bend radius of the wire harness; the more cable it comprises of and the wider the cable is, the larger the bend radius will be. For example, a bend may turn red when the cable is being collected – this indicates that the minimum bend radius has been undershot while a cable is being inserted. By using the mouse, Simson can adapt the layout of the wire harness to ensure that the bend radius is adhered to.

The last step consists of automatically creating a nailboard drawing. This drawing is actually positioned on a large board and the course of the wire harness is shown using nails. This means that the individual wires can be placed onto the board and that the wire harness can be completed. Running Snail has had good experiences with this, as Simson explained: “The lengths of the cables have always been correct in the three-dimensional wire harness; the function installed in Eagle did not always produce this result. We were able to fit the wire harness into the vehicle straight away and we didn’t forget a single cable when doing so.”

EPLAN Harness proD supplies valuable information that is needed when constructing the vehicle at the touch of a button, including how much cable is needed, which colours and which diameters are required.

Thomas Simson summarised it as follows: “It took us a month to go from nothing to a complete harness. This used to take much longer, although the wiring was much smaller. What’s more, the cable lengths were exactly the right length; there was no need to add an extra bit for safety to the cable length. EPLAN Harness proD has brought us measurable advantages. The system manufacturer provided support and we were able to clear up any questions quickly on the telephone. The operation allowed us to work productively with the software, even alongside our studies.”

Priva UK comments on the Industrial Strategy: What are the implications for BEMS manufacturers?

Join with key industry professionals at the Building Services Forum 2018