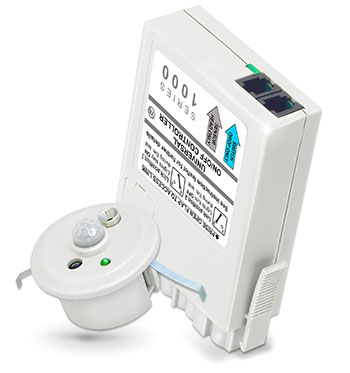 Anyone connected with the commercial lighting sector will be aware that the drive for increased energy efficiency has resulted in passive infra-red (PIR) lighting controls becoming the norm. Whatever the type of installation, be it a school, hospital, office or retail outlet, areas where luminaires are controlled by a simple switch on the wall are greatly outnumbered by those incorporating something a bit more.. involved.

Occupancy control, where lights turn on automatically as someone enters a space and off after it’s vacated, is the basic control premise and virtually everything else is a variation or add-on of this simple principle.

Absence control differs slightly in that it requires the pulse of a momentary switch to turn lights on, but they’ll turn off automatically after the area’s vacated. Absence will yield greater savings than basic occupancy because the user of the space can decide whether to initiate the lights on; no pulse of the switch, no lights.

Further efficiencies can be squeezed out of both occupancy and absence methods with the addition of light level sensing. This comes in two flavours, daylight dependency and daylight linking, and is employed in spaces with good levels of natural daylight. Daylight dependency simply switches the lights off once a target light level is surpassed, whereas daylight linking gradually lowers/raises the output of a luminaire to maintain a constant light level. 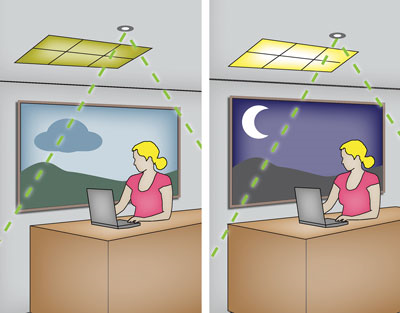 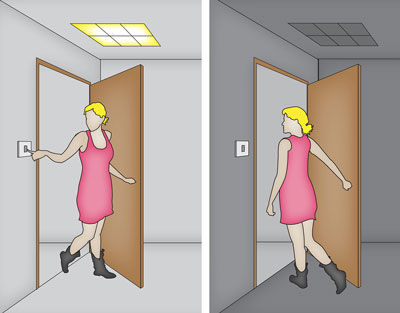 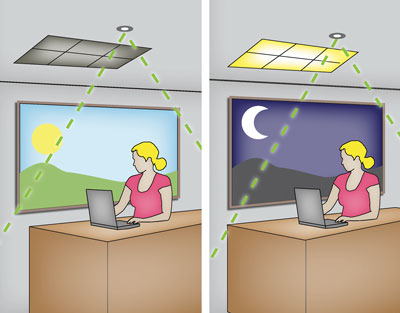 What should you be considering?

The temptation to use as few sensor heads as possible in a space is common, but the further away from the head, the greater the movement required to trigger it. A common solution is to increase the timeout to maximum because ‘Someone’s bound to make a big enough movement in 40 minutes, aren’t they?’ Granted, it’s a solution, but the wrong one. Imagine somebody walks into a room, automatically turning on the lights as they do so, picks something up then leaves; all the lights are on for the next 39½ minutes. This is completely at odds with the reason for installing the lighting controls in the first place? A better solution would be to install enough heads to ensure finer movements are picked up anywhere in the space. This allows the timeout to be set appropriately, resulting in greater efficiency and a swifter ROI as a result. Choosing a product that will allow extra sensor heads to be easily added will increase the installer’s efficiency too.

The growth rate of lighting controls could be considered snail paced when compared to that of LED during the last couple of years. However, one aspect of LED lighting that should be given serious consideration is the in-rush current which is generally significantly higher than that associated with its fluorescent cousins. It’s sensible therefore to use lighting control devices with relays capable of handling this current. Unlike the previous point, insisting the lighting control device incorporates a high in-rush relay may not increase an LED’s efficiency per se, but it will probably extend the life of the control device. Efficiency comes in various guises.

Not all DALI/DSI specific lighting controls incorporate a relay, as the connected luminaires can be switched on/off and regulated up/down via the sensor’s digital output. This requires that the luminaire be permanently live and results in a small amount of current, commonly referred to as parasitic load, being drawn 24/7; imagine a TV left on standby. Selecting a DALI or DSI lighting control device that incorporates a relay can allow a luminaire’s parasitic load, which could accumulate to relatively significant levels in large installations, to be negated. Additionally, such a device is capable of controlling regulating and non-regulating loads simultaneously.

The best way to achieve maximum efficiencies out of any electrical product, not just a luminaire, is to ensure it’s on only when required. As specifiers, installers and manufacturers, we’re responsible for ensuring that the electricity bill payer is given a system that does just that. Applying a few simple thought processes at design and installation can result in our client getting a return on their investment sooner rather than later.