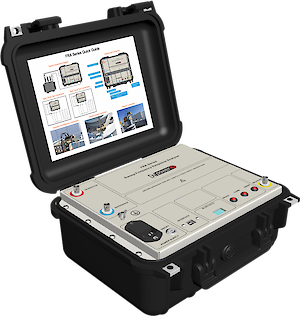 •    Potential mechanical and electrical problems detection in power transformers
•    Quick test where the fingerprint is compared to a post event response
•    Movement of the active parts detection (caused by transportation, earthquakes), or mechanical impacts due to short-circuit forces after a failure

DV-FRA software provides an analytical tool that can perform correlation between two traces per the IEEE C57.149-2012, or DL/T 911-2004 standard.

Sweep Frequency Range and Sweep Time
The FRA500’s sweep range is user-selectable from 0.1 Hz – 25 MHz. A typical test sweep time, with frequency ranging from 20 Hz to 2 MHz is less than 20 seconds. A quick sweep test can be performed in under 10 seconds to confirm proper cable connections.

Output Voltages
The FRA500’s test voltage range is programmable from 0.2 Vpp to 20 Vpp in 0.2 Vpp steps. This enables the user to match the test voltage to tests performed by another manufacturer’s device.

Dynamic Ranges
The FRA500 offers a dynamic range greater than 150 dB with a measurement accuracy of ±0.1 dB from +10 to -40 dB and ±0.5 down to -100 dB.
The higher dynamic range eliminates the effects of noise and facilitates the comparison of different sweeps.

Computer Interfaces
The FRA500 is computer-controlled via USB or wirelessly via Bluetooth. The Bluetooth feature allows test personnel to be at a comfortable distance from the transformer for increased safety and productivity.

Optional Battery Backup
An optional built-in battery backup is also available that can provide power for up to four hours. The FRA500 uses a sealed lead acid battery (12V, 7AH).

Self-check test
As included accessories, there is always verification box intended for the self-check of the unit. 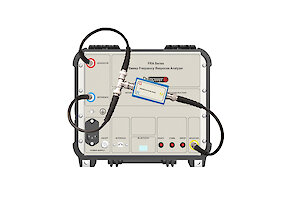 FRA500 injects a sine wave signal with constant amplitude and variable frequency to one side of a transformer winding. The amplitude and phase angle values of the reference (output) signal are then compared with the corresponding values of the measured signal (from the second side of the winding). The ratio of the measured signal and reference signal magnitude is graphically displayed in dB through the full sweep frequency. The phase difference value between the measured and reference signals are also displayed through the full sweep frequency.

Getting smart with cabling

Access to Brazilian and Russian ‘Ex’ Market via CSA-Sira