Millennium mission – Upgrading the roof of the iconic stadium in Cardiff 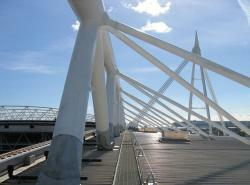 The fully retractable roof at the Millennium Stadium in Cardiff is one of the venue’s best known features. However, after seven years of operation, the roof’s control system was becoming increasingly difficult to maintain and support. In particular, the existing SCADA system was a bespoke package for which support was no longer available, and the HMI panels used to initiate and monitor the roof’s operations were obsolete and incapable of further enhancement.

Schneider Electric, Services & Projects, was invited to submit proposals for a new and more versatile control system that would also provide a high level of future proofing. As a preliminary step, the requirements of the application were analysed. The roof opening and closing operations are driven by eight hydraulic winches, each of which is equipped with proportional valves to provide speed control. The speed of the winches is monitored by shaftmounted encoders, which are also used for alignment control and to initiate misalignment alarms.

Overall control for the existing system was provided by an obsolete Modicon Atrium programmable controller. The operator interface was provided by Magelis electronic HMI units which were also obsolete. Finally, the SCADA system used bespoke software that could neither be extended nor maintained.

Schneider proposed a solution based on the Unity programmable controller, accompanied by one 15- inch XBTGT HMI unit for the main display and controls, plus four smaller auxiliary XBTGT HMI units, one of which would be mounted in each of the four winch houses.

Since all of these new items, like those in the original system, were products from the brands of Schneider Electric, this approach had the benefit that, in principle at least, the existing software could be converted, thereby avoiding the inconvenience of having to rewrite it from scratch.

Having been awarded the contract on the basis proposed, Schneider Electric, Services & Projects, began the work of converting the programs. The conversion process proved to be straightforward for the control program, with the only hitch being an undeclared variable error that was quickly remedied.

The situation was slightly more involved for the HMI panels, where the age and design of the small units originally used in the winch rooms, meant that the software could not be directly converted. However, re-writing was only a minor task as the functions of these units are straightforward and, apart from addressing, the software in each of the four units is identical.

For the large HMI panel, the situation was complicated by password protection on data files used by the original software. Unfortunately, the passwords were not available, and password hacking proved ineffective. As a result, the data files that, for example, scale the roof position information, had to be regenerated.

An important requirement of the project was that the new HMI panel should present information in a way that was as close as possible to the display used by the original SCADA system. This was Windows-based and controlled using a mouse and keyboard.

The main challenges were to fit all of the graphics on the screen while incorporating the navigation buttons, and to animate the graphic of the roof opening and closing, bearing in mind that the scaling of the signals from the encoders was originally done in the old SCADA system. Fortunately, the Magelis programming tools made it possible to address these issues. 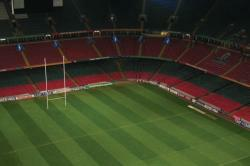 The hardware changeover presented challenges of a different nature, since the work had to be carried out when no events were scheduled at the Stadium, which meant that strict deadlines had to be observed. In the event, installing the new hardware and software, and the commissioning process took less than five days, in spite of the winch houses and the control room being separated by a very long walk. A trial roof opening had been scheduled for the final day but in fact, was achieved a day early, leaving only minor fine tuning to be completed on the fifth day.

“To say we are delighted with the work carried out by Schneider Electric, Services & Projects, and with the performance provided by the Magelis HMI units and the new Unity PLC would be an understatement,” said stadium manager Gerry Toms. “The new system provides us with big benefits – it’s easier and much more intuitive to use, it’s much more reliable and, of course, it’s readily maintainable.”

“In addition,” he continued, “the technology used will undoubtedly continue to meet our needs for the foreseeable future.”

Wieland connects the power at 33 Central