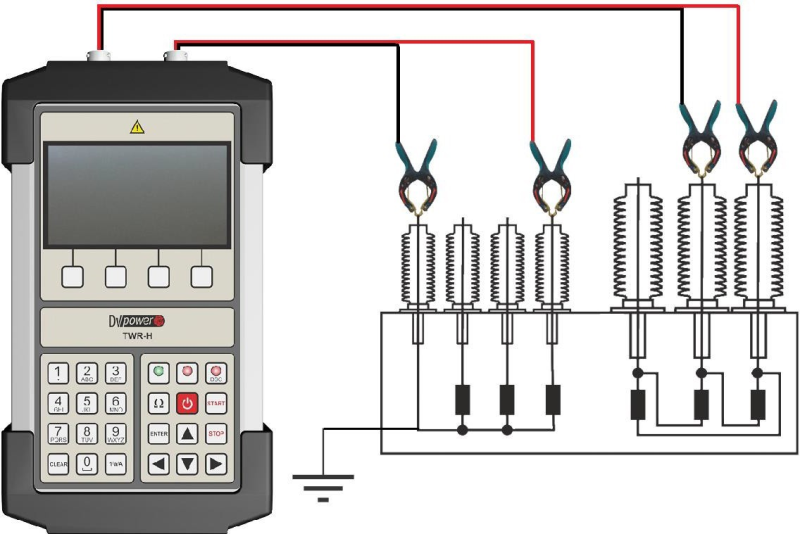 TWR-H is intended for turns ratio and winding resistance measurement of single-phase and three-phase transformers. In addition, it can also demagnetize transformers.

The TWR-H is designed to be connected to one phase at a time, as illustrated in figure 1, which is an example of connecting to a high voltage (HV) and a low voltage (LV) winding of a three-phase transformer

Because the unit is handheld and battery-powered, and that it can be connected to one phase at a time, it is ideal for testing distribution transformers where cables can be easily moved from one phase to another.

A common issue when testing winding resistance of distribution transformers is the selection of the test current. Distribution transformers have high turns ratios, and therefore high difference between rated HV and LV currents. Testing HV and LV windings simultaneously using the same test current can be challenging. The test current must be less than or equal to 10% of the HV rated current to prevent significant heating of the HV winding. However, such test current is very often too low for the LV winding and can cause incorrect LV winding resistance measurements.

Injecting a DC current through a transformer winding, as is done during winding resistance tests, will leave residual magnetism in the transformer core. This residual magnetism can cause various problems such as incorrect diagnostic test results (especially excitation current and FRA) as well as inrush and asymmetrical currents at start-up of a power transformer and incorrect operation of its protective relays. It is recommended to perform transformer demagnetization after completing winding resistance tests, and prior to turns ratio measurements.

TWR-H performs transformer core demagnetization using a proprietary program which applies a progressively decreasing DC current down to 0 A, continually changing its polarity as it does so. By reducing the magnitude of the applied current to the zero value, the total magnetic flux, or residual magnetism, is also annulled. Demagnetization is performed on the transformer’s HV side, using the first DC current source. The starting demagnetization current should be the same as the test current used for HV winding resistance test.

TWR-H is equipped with AC source that can provide up to 40 V AC. Our research shows that this voltage is high enough to obtain accurate turns ratio results on distribution transformers. Together with turns ratio, TWR-H also calculates ratio deviation, and measures excitation current and phase angle.

A low test voltage of 1 V AC can also be selected, which is necessary for verification of a current transformer’s (CT’s) turns ratio. By measuring the

Audible and visual warning devices for fire, gas and security systems on show at Security Essen

Wieland make a connection at The Reflector