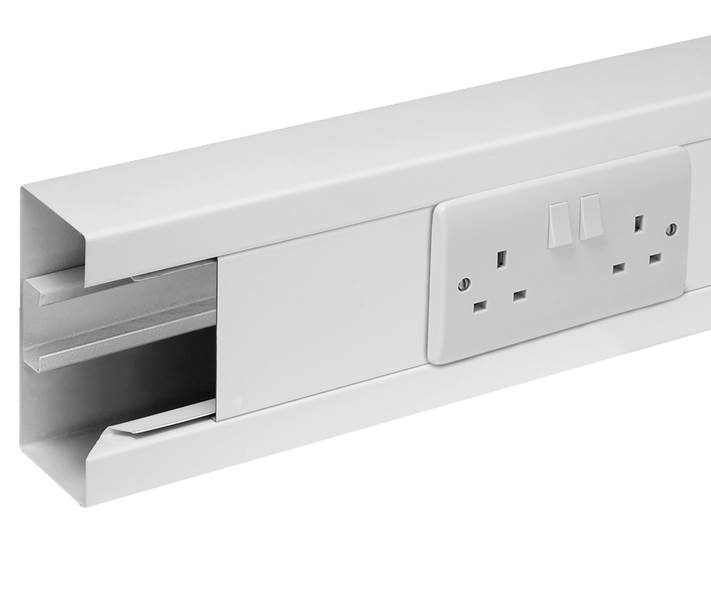 “We were after a very specific containment system to carry greater levels of technical data,” said Nick Foster, Project Manager, Estate Services, Leeds Metropolitan University. “We wanted steel as it is more robust and we wanted it in white. We also needed to compartmentalise all data and power supplies, plus the system needed to be familiar in principal to our maintenance teams who will carry out the on-going maintenance. Marshall-Tufflex’s Steel System 130 met our brief all round and it was very easily installed. In particular the lids are a lot easier to remove than lids on comparable systems that are hard to take off.”

The 10-storey Portland Building is a 1950’s pre-cast concrete building undergoing phased refurbishment of all floors. It houses teaching and office space. The first phase included the installation of three service risers over 10 floors and strip back of the 7th floor to the original structure. Now refurbished to a high specification, the 7th floor has been transformed into a Clinical Skills Suite for students studying health care professions.

The specification of white Steel System 130 perimeter and skirting containment was made in collaboration between consulting engineer Arup Consulting Engineering and the university’s Estates Services. The system met the technical brief, offered easier functionality than the originally specified dado and satisfied aesthetic requirements for fitting ‘flush’ to the walls. Fifty lengths of Steel System 130 trunking were installed within this first phase by Richardson Electrical of Bradford, with further floors to be fitted-out similarly. The trunking was supplied by Newey and Eyre, Leeds.

Steel System 130 is a pre-galvanised perimeter and skirting containment system characterised by easy installation. Its profiled steel covers are a particular feature as they snap into body automatically, establishing earth continuity through a side gripper built into the cover, which removes the need to earth bond the cover separately. Steel System 130 also has a dividing fillet to sub-divide into three compartments making it suitable for a wide variety of applications, such as education, health and office buildings, where larger amounts of data require sub-division. The product is polyester powder coated, comes in white as standard and in other colours to special order, plus it is suitable for all standard, single and twin accessories.

Spectrum gets the green light at Thruxton