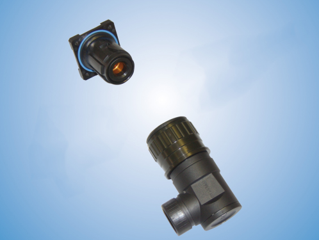 The newly re-launched HBB series of single pole high power 300A and 500A circular connectors from Smiths Interconnect offer a compact, lightweight and ruggedized heavy duty connector designed for use in all types of harsh environment applications, including electric vehicle drive systems, rail transport and industrial applications.  Now assembled by Aerco, they are available with no MOQ and two week lead-times.

Available in a RoHs compliant Black Zinc Nickel finish, the durable HBB delivers a more efficient, higher current transmission in a more compact and lighter connector compared to similar sized 38999 style products and has a superior endurance of 5000 mating cycles. Meeting design SWaP goals of high power within a small size and minimal weight interconnect solution, the 300A connector is achieved in a size 17 shell and the 500A connector in a size 21 shell, with current specified at 100°C. The robust aluminium shell is available in three different shell polarizations, fully sealed to IP67 ingress protection and featuring 360° EMI/RFI shielding via a customer serviceable conductive ‘O’ ring, which is fitted as standard to receptacles.

The HBB series is rated for surge/inrush currents of 6 kA for the 300A and 10kA for the 500A for 1 sec, making it suitable for deployment in applications like induction motors and power converters.

Compliant to the MIL-DTL-5015 specification for heavy-duty circular electrical connectors for harsh environments, the connectors feature the best electrical performance and high levels of shock and vibration immunity due to the use of Smiths Interconnect’s hyperboloid contact technology. The ultra-low resistance and smooth and light wiping action of the hyperboloid contacts results in low fretting fatigue/corrosion and long contact life with minimal degradation in performance. The three dimensional symmetry of the hyperboloid contact design ensures this high degree of immunity to shock and vibration, guaranteeing electrical continuity in all circumstances. Contact resistance figures as low as 0.05m? keeps resistive losses and generated heat at a minimal, facilitating maximum transmission performance.

The plugs and receptacles are gender reversible, available with either pin or socket contacts, and they can be ordered with optional straight or right angle back shells. Accessories include crimp lugs, heat shrink boots and additional O-rings.

Standard operational temperature range is -55°C to +150°C and voltage rating at sea level is 750vdc.