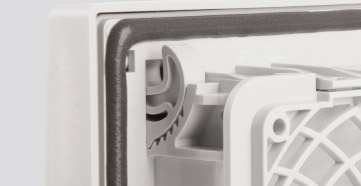 STEGO Filter Fan Plus expels more air from an enclosure.

After merely 26 months of research and development ‘the protectors of electronics’ STEGO, launch a filter fan series that will create a sensation. Its new air-flap technology achieves considerably more efficient air circulation which is a big plus in operational terms.

The filter fan series comprises five enclosure cut-out sizes from 92 x 92 mm to 291 x 291 mm. ‘We cover all relevant fields of application with these sizes. A very customer-oriented approach!’ – STEGO CEO Elmar Mangold declares. But this is by far not all that is to be marveled at. Users can take delight in the totally novel ratchet mounting mechanism, improved access protection and lots more.

But back to the core of the product: the air-flap technology. Elmar Mangold describes it as a suggestion of ‘German inventive spirit’. Because it reached maturity at STEGO’s R & D through trials in manual model making. Contrary to the filter mats, the flaps allow for noticeably more air to exit. Consequently a smaller filter fan suffices to achieve the same airflow output than a bigger device did before. Thus saving cost and installation space! Positive side-effect: In idle mode of the fan the recessed flaps stay closed and dirt stays out. 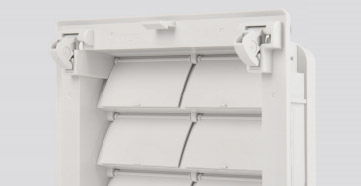 Users can benefit quickly and easily from more air in enclosures. Due to a STEGO in-house development of mounting ratchet braces the Filter Fans Plus can be inserted and mounted tool-free into the cut-out of the enclosure. By pressing of the ratchet braces the Filter Fan Plus is drawn to the cut-out, clicks into place and is firmly sealed. Even without additional gluing the slim filter fan fits perfectly.

On the other hand the hood of the Filter Fan Plus is deliberately designed to be opened with a screwdriver only. This allows for better access protection and consequently for more safety.

Conclusion: The German manufacturer STEGO ‘the protector of electronics’ – introduces a powerful product series to the market with the Filter Fan Plus and resumes its position as innovation leader. ‘The Filter Fan Plus series is distributed by our twelve locations worldwide. We thereby serve customers in over 90 countries. With this product launch we once again want to live up to our role as global player’, reports Elmar Mangold, who anticipates numerous customer requests in the near future.

The market introduction of the Filter Fan Plus is accompanied by an attention-grabbing advertising campaign that intentionally presents the power of the filter fans in distinct exaggeration. Are you curious? You will find the advertising theme under www.filterfan-plus.com

Since it was founded in 1980, STEGO Elektrotechnik in Schwäbisch Hall, Germany, has been developing, producing and selling an ever-growing range of products for the protection of electric and electronic components. All STEGO products for cabinets and enclosures – heaters, fan heaters, filter fans, LED-lamps, thermostats, hygrostats and accessories – are aimed at reaching optimum climatic conditions in the most varied environments, ensuring that all sensitive components work reliably at all times. STEGO is now represented at 12 locations and by more than 200 sales partners worldwide.

Megaman puts the focus on merchandise