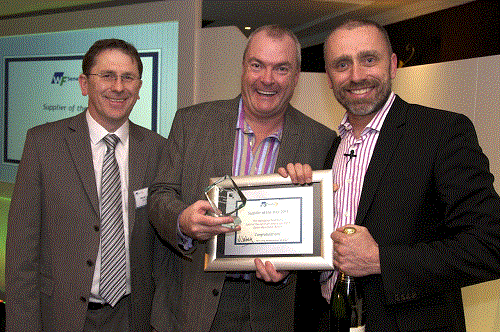 Power management company Eaton has announced that Dylan Mansfield has been awarded the ‘Managing Director’s Special Recognition Award for 2013’ at WF Senate’s Supplier of the Year Awards on the 6th March. Dylan won the award for his outstanding contribution in his role as UK channel account director for Eaton’s Cooper Lighting and Safety business division. The award ceremony took place at Coombe Abbey in Coventry and Dylan was chosen from a group of nearly thirty other nominees from leading companies within the electrical industry.

Dylan was nominated for the Managing Director’s Special Recognition Award based on his continued work and reputation with WF Senate, a distributer of electrical supplies, as well as feedback from their customers which included his customer service skills when dealing with challenging requests. When asked about the award, Dylan said “This is our first award from WF Senate so I am immensely proud and honoured to have myself and Eaton recognised for our continuous support and commitment to our customers in the lighting and safety sector”.

Having previously worked for a confectionery company as its UK sales director, Dylan started working for Eaton’s Cooper Lighting and Safety business 11 years ago as its national account manager. After undertaking a lighting design course and completing various lighting industry exams, Dylan has overseen the launch of numerous products and taken the principal role on significant sales leads.

Regulation: what does it mean for DNOs?