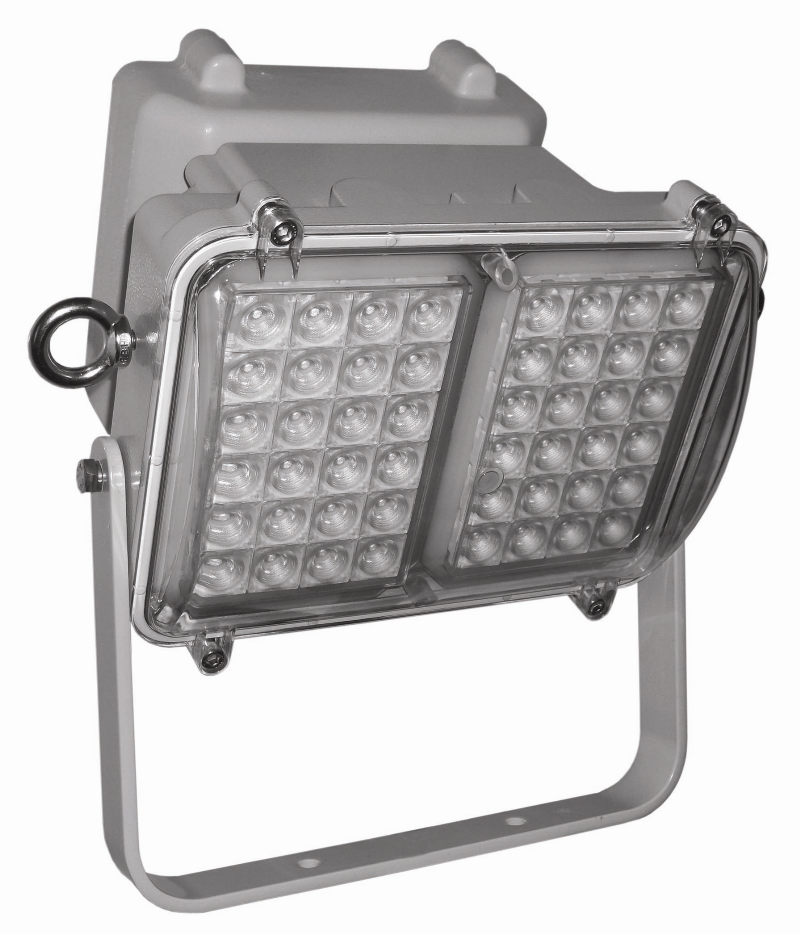 Launched last year at the Offshore Europe exhibition in Aberdeen, the LED floodlights have been designed specifically for stairwells, muster areas, lifeboat stations and other critical zones in Zone 1 & 2 Hazardous Areas requiring large amount of light even when normal power supplies fail. With full certification through SIRA for both ATEX and IEC Ex applications, the lights were primarily intended for offshore oil and gas applications but are actually being installed in a wide variety of both offshore and onshore applications.

Weighing just 9 kgs, the units can be set up in single, double or even triple arrays with the amount of light generated able to be pre-set dependant on individual requirements.

Bill Armstrong, Hadar’s Sales Director, explained the advantages of the lights. “The original HDL106 LED floodlight has met with universal approval across a wide range of sectors, but in the offshore sector the lights have been particularly well received. Whilst in mainland installations these LED lights very quickly pay for themselves through low maintenance and power requirements, in offshore emergency situations the important criteria is not necessarily the cost of running, but rather the minimal draw of power in a situation where a finite supply of power is available.”

“In addition, as the amount of equipment on rigs increases, so does the light required on increasingly cluttered decks. More lights normally require more power which isn’t always easy to arrange, especially on older rigs, so the huge advantage of our LED floodlights, whether for normal operations or emergency situations, is that engineers can produce more light, with less power and without the need for costly re-wires. They are easy to fit, cheap to run, very rugged, give off a fantastic white light, require very little maintenance, are instantly on or off with no warm up period and should last in excess of 100,000 hours.”

“This emergency version has been developed due to customer demand for similar lights for muster stations and emergency escape routes.  The lights are for ‘fit and forget’ situations where conventional battery powered luminaries normally give 10% of normal output but the LED floodlights can be pre-set to give light from 90 minutes on full power to six hours on 25% power by activating different numbers of the integral LEDs – a feature which is obviously impossible for traditional luminaries.  The HDL106E’s are lightweight and can handle the vibrations on offshore platforms, rigs and marine vessels which necessitate constant maintenance for traditional emergency lighting.”

Established in 2005, and now part of the A-Belco Group, Hadar Lighting is a specialist manufacturer of hazardous area products for the oil, gas, petro-chemical, pharmaceutical and marine industries worldwide offering the design and production of products for Zone Classification Areas 1, 2, 21 & 22, Gas and Dust. Further details of the Hadar range is available at www.hadar-lighting.co.uk

The Price Is Light