SMART-i, a Y3K company, has entered the Home Security market with a fully integrated range of wireless and simple-to-install security products. SMART-i allows you to monitor and manage security devices and home appliances from your Smartphone, combining three systems – CCTV, Alarms and Power Control – on one easy-to-use device. The system is extendable and expandable with additional compatible Wireless Cameras, Motion Sensors, Door/Window Contact Sensors, Sirens and other sensors for greater protection.

The SmartHome Security Gateway is the hub of SMART-i and will operate up to 24 wireless devices and four Wi-Fi cameras. The Gateway is plugged into a router and a simple P2P (peer-to-peer) setup between the devices and a Smartphone is all that is needed to operate the system. A key fob to activate, arm and adjust devices is also available and can be used to control the system remotely. 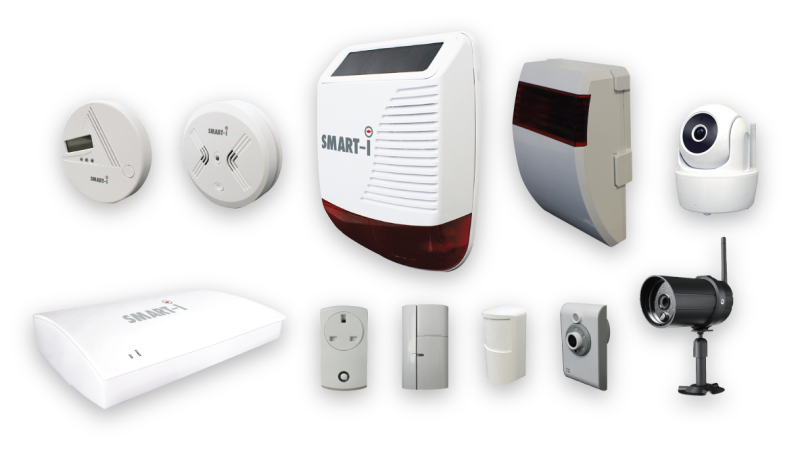 SMART-i home technology will detect and deter criminals while also keeping homes and their occupants safe from other hazards, such as a water or a carbon monoxide leak. Push notifications sent directly to your Smartphone in the event of emergency alert users if anything is wrong at home. These integrated devices can then be viewed and controlled using the iOS or Android Smartphone app.

For example, a smoke alarm has gone off at home or a door contact that would not normally be used has been activated. Users can instantly access video (both live views and recordings) to see if there is cause for concern. The SMART-i system pre-sets can even use a random on-off cycle so that devices create a ‘someone is at home’ effect to discourage burglars.

The devices integrated into the system (customised according to individual needs) allow users to check the status of everything at home, ranging from whether they have set the burglar alarm to whether an iron has been left on. In fact, any device in your home that uses electricity can be put on your home network and be controlled, activated or deactivated at your command. Whether you use the remote control, Tablet or Smartphone, the system has the flexibility and intelligence to react if required.

SMART-i Home Security not only integrates these devices, but extends its intelligence to ‘IF This happens Then do That’ (IFTTT), where

by the user creates a chain of scenarios through which a change in circumstances noted by one device will trigger an automatic command to another device. An example might be: “If an external PIR-based motion sensor is activated, then set CCTV cameras in that part of the property to record, activate all the lights and a siren and also send me the video footage.”

Current domestic security systems, which can be difficult to use and install, often lead to a high percentage of alarms not being used due to the fear of having to deal with false alarms. Such systems often involve monthly fees and contracts, making them expensive and ineffective – particularly when recent research suggests that more than 60% of burglary alarms are ignored.

SMART-i now makes it easy to control, protect and monitor your home from anywhere in the world using a simple Smartphone app giving you total peace of mind when you’re not at home. The whole system also uses wireless technology (868 MHz), making it simple and quick to install.

Paul Singh, Y3K’s Group CEO, said, “SMART-i gives home-owners the flexibility to regulate their environment in a way that hasn’t been possible before. They can also mix and match from our control, CCTV, alarm and power units. The intelligence in SMART-i products is putting people back in control of where they live, making them safer and saving them valuable time. The combination of detection and protection from the SmartHome Security range can be as simple or complex as it needs to be.”

SMART-i is sold via security distributors, electrical wholesalers and other online retailers. All products carry a 2-year warranty. Information is available by telephoning +44 (0) 1483 397 002 or visiting www.smart-i.com

Marking wherever you want

Intelliconnect launches its own brand of Semi-Flexible Cables

TR Fastenings Lights the Way with Latest in Fastener Technology