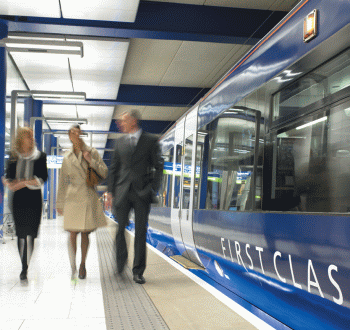 The Heathrow Express high speed rail link is utilising an interconnected rail infrastructure and safety solution from Rockwell Automation which is helping to provide the rail company with 99% reliability.

Launched in 1998, Heathrow Express provides a high speed rail link between Heathrow Airport and London’s Paddington station, with 150 trains carrying an average of 16,000 passengers every day between the airport and the capital.

Since its launch, Heathrow Express adopted a forward looking approach to the handling, reporting and delivery of information to both passengers and company personnel, but when its existing control infrastructure started to suffer from obsolescence, patchy support and unacceptable reliability figures, Heathrow Express turned to technology from Rockwell Automation specified by Firstco, a technical engineering consultant, to solve the problem.

Firstco was tasked with specifying and sourcing a contemporary solution to Heathrow Express’s control needs, with the criteria for the replacement control solution being decided upon right from the outset.

Firstco’s initial task, as a consultant, was to gather all of Heathrow Express’s technical requirements, draft a user specification and then put it out to tender. However, Firstco’s role in the project steadily grew above and beyond its initial status as a consultant and, in 2003, it recommended the complete replacement of the bespoke/closed incumbent SCADA solution, which was proving difficult to maintain and update while being very inflexible to Heathrow Express’s needs.

Firstco’s investigations lead it to the decision that a SCADA solution based on RSView 32 from Rockwell Software would suit the requirements of the application. In 2004, Heathrow Express asked Firstco to take over the ongoing maintenance and supply of all systems including telephony and data, and very soon the project demonstrated its need to be scalable and moveable when Firstco was also asked to develop the control and communications infrastructure for the Heathrow Terminal 5 station expansion.

In the existing PLC network Heathrow utilised Allen-Bradley SLC PLCs for monitoring the utilities. Firstco was able to change the interfaces to other systems to a Rockwell Automation interface, which allowed the infrastructure to ‘talk’ to all sub-systems, removing the reliance on the older ‘black box-based’ solution.

Bill Martin, director at Firstco, explained the solution in greater depth, “The PAC network uses in excess of 10km of dual redundancy cabling, both copper and fibre, to connect 23 ControlLogix PACs on a ControlNet network. Eighteen of the PLCs are configured as hot standby, fully redundant pairs and are SIL2 compliant. The PACs are networked to 49 purpose built remote I/O control panels giving connection to approximately 2,400 digital and analogue I/O points. In addition to the hardwired inputs the system also has seven different protocol interfaces allowing the control room staff seamless control of the various third party systems.

“A redundant server/client RSView 32 SCADA system brings all of the systems together to provide a fully integrated user interface. The additional control and monitoring required for the new T5 systems have been engineered into the existing graphical user interfaces (GUIs) to help make sure the entire network, now comprising 59 PACs, appears and operates as one single, integrated system to the operators. The design for the new control room had to be flexible, maintainable and above all future-proof ready for the integration of the new Terminal 5 station. The three position control room (operations, services and break relief/incident management) allows each operator to have full control and monitoring of all sub-systems onto a single fully integrated workstation.”

He continued, “We used standard SCADA because it is easily maintainable and modifiable. What is more, it can be done by other parties, unlike ‘black box’ solutions, which often tie you to the original supplier. What we have done is break the ‘black box’ monopoly. When T5 came along, with the same remit as the original upgrade, we worked very hard with Rockwell Automation to deliver a system that the staff at Heathrow Express liked and took pride in.

“The major difference between T5 and the original system was the requirement for a SIL2 solution for the tunnel ventilation, and we were already in a good position thanks to Rockwell Automation’s ability to supply SIL2 capable equipment. In fact, we think this may well now be one of the biggest SIL2 PLC networks in the world with over 60 dual redundancy ControlLogix PACs.

“By putting all of the control systems in a single EtherNet/IP and ControlNet architecture there is a high level of integration between the sub-systems. This means that they ‘listen’ to the relative statuses of each other and offer the controllers quicker reactions to issues – which is especially important due to the requirement of the station’s ‘six minute/no action’ evacuation protocol.”

Keith Harding, operations director at Heathrow Express, summarised, “Over the last few years we have seen 99% reliability of all systems, due in part to the dependability and reliability of the infrastructure supplied by Rockwell Automation through Firstco. The opening of T5 increased traffic by some 14% and achieved the highest reliability rate, irrespective of T5’s well publicised teething problems.”

Battery packs for underwater use