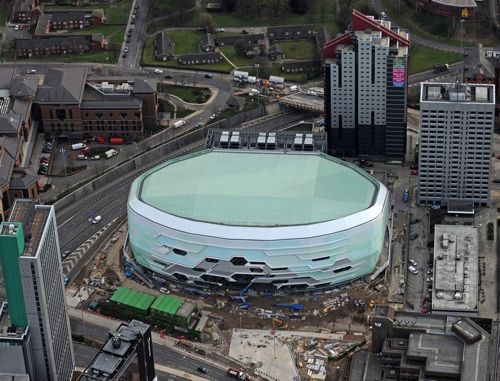 Prysmian’s FP 200 Gold ‘standard’ fire resistant cable has been specified and installed in both the fire and public address systems at the new First Direct Arena in Leeds.

Andrew Hutchinson, sales director for the Yorkshire branch of FaelSafe, oversaw the installation of the cable in the UK’s first fan shaped construction. Hutchinson explained, “It’s a tough, durable and dressable fire resistant cable which is easy to install and terminate. FP 200 Gold has excellent data and signal transmission characteristics which make it ideal for voice alarm, addressable and networked systems.

“Especially for an arena which can accommodate 13,000 people, fire safety is of the upmost importance. Prysmian FP cable was specified to ensure maximum fire security.”

FP 200 Gold has received BASEC and LPCB approval for meeting the requirements of fire alarm code of practice BS 5839 and the emergency lighting code BS 5266. FP 200 Gold is regularly chosen because of its Insudite – Prysmian’s, damage resistant insulation which significantly reduces the risk of accidental damage during installation and third party damage post commissioning.

Electrical completion was delivered on time at First Direct Arena on the 26th of March 2012. The super theatre, situated in the heart of Leeds city centre, has a capacity for 13,000 people. The arena boasts an external honeycomb design which changes colour dependant on the show at the time and was opened to the public in summer 2013, with a host of British and international acts.