basicDIM wireless technology from Tridonic enables wireless networking of luminaires without any additional wiring or structural changes to the building. Uncomplicated and fast control of the lights and their settings is handled via Bluetooth, including on/off switching, dimming, and grouping of luminaires and setting up lighting scenarios.

Many places of work are switching to modern lighting based on LED technology to enjoy financial savings, energy efficiency and improved functionality that can be achieved by upgrading to LEDs. Integration of intelligent lighting control enables power consumption to be reduced and allows for the flexible use of a space. Intuitive control and simple and efficient light management, for example with presence sensors and automated dimming over the course of the day or a timer can mean a considerable amount of work for the installer and complicated commissioning.

One way to modernise the lighting together with the control system without major structural work is to use Tridonic’s basicDIM Wireless with its Casambi-ready technology that controls the luminaires via Bluetooth Low Energy (BLE) without the need for an additional gateway.

Casambi-ready control technology consists of several components such as LED drivers, communication modules, sensors and an app and allows for a flexible and versatile system, forming a secure wireless mesh network which communicates via BLE. The solution is ideal both for modernising an existing lighting system and for installing a new one and, with basicDIM Wireless, up to 250 devices can be easily controlled in a single system via Bluetooth.

The Bluetooth system can be set up quickly with little disruption and requires no complicated programming or new cabling. Lighting can be switched on and off via an app or a remote control, or wireless switches can be placed anywhere in the room and linked to the basicDIM Wireless system. The Bluetooth solution provides an easy way to set up personalised and demand-led lighting with minimal time, effort or structural changes.

Simple commissioning and intuitive control via an app

A free app for all devices is available for quick and simple commissioning, programming and control. The entire system can be easily set up, configured and adapted via the 4remote BT app and all the desired settings can be made wirelessly in no time at all with no complicated processes for putting the system into operation. Localising, naming and grouping the luminaires and setting up lighting scenes are all easy to do via the app and there is no need for an internet connection. Once in operation, the system can be scaled up and reconfigured through a single app and without the need for any additional tools and has also been designed for end users to control the lighting for simple on/off switching, dimming the luminaires, changing settings and selecting specific lighting scenarios.

To maintain security, access to the system via the app is therefore password-protected and communication is encrypted.

Lighting control can be set up and used according to requirements and budget. Each luminaire in the room can be controlled individually via an integrated Bluetooth module to offer maximum flexibility for light management and meeting individual requirements. Several luminaires can also be combined into groups and controlled centrally via a wireless radio module, all interconnected via DALI lines to form a unit and then linked to a Bluetooth module. 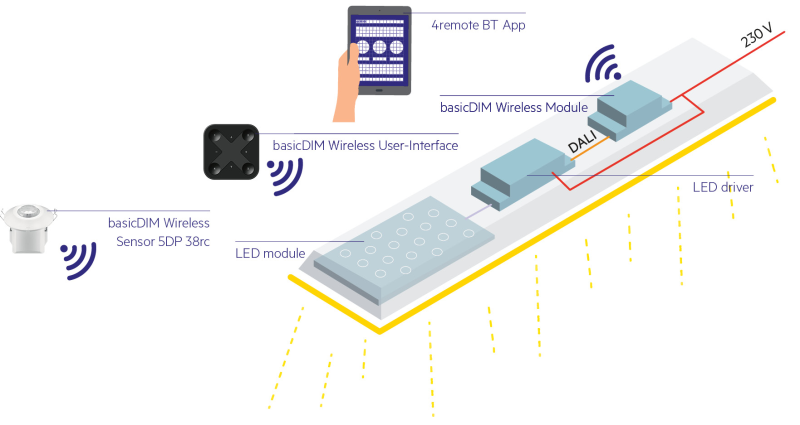 The lighting for entire rooms or individual workplaces can be user-defined and can create a personalised lighting mood – the luminaires can be dimmed as required and the light adjusted.

The grouping of luminaires can make day-to-day work easier and improve visual performance in different situations. In offices and schools, for instance, all the luminaires above a table or island can be combined into a single unit. Rows of tables or workstations near windows can be controlled separately from those along internal walls depending on the amount of daylight falling on them.

Rooms with multifunctional use benefit from retrievable lighting scenes, pre-set for varying activities. Whether for presentations, team brainstorming or meetings, offices and conference rooms can be used to optimum effect. In classrooms as well, the light can be adapted for group work, silent work, face-to-face teaching or relaxation time.

Walkways in underground garages or warehouses can be illuminated under control from presence sensors that switch on fully only when it is needed. At other times it is dimmed to save energy and costs and, in combination with a timer function, it is possible to set the length of time the light will be at full brightness after presence detection, after which it will be dimmed down again.

Whether for retrofitting or for new buildings, Tridonic’s basicDIM Wireless has many applications and enables installers to fit a lighting system offering individual control without major structural changes and, thanks to Bluetooth, control is predominantly wireless.