Get your MITs on Megger’s new insulation testers! 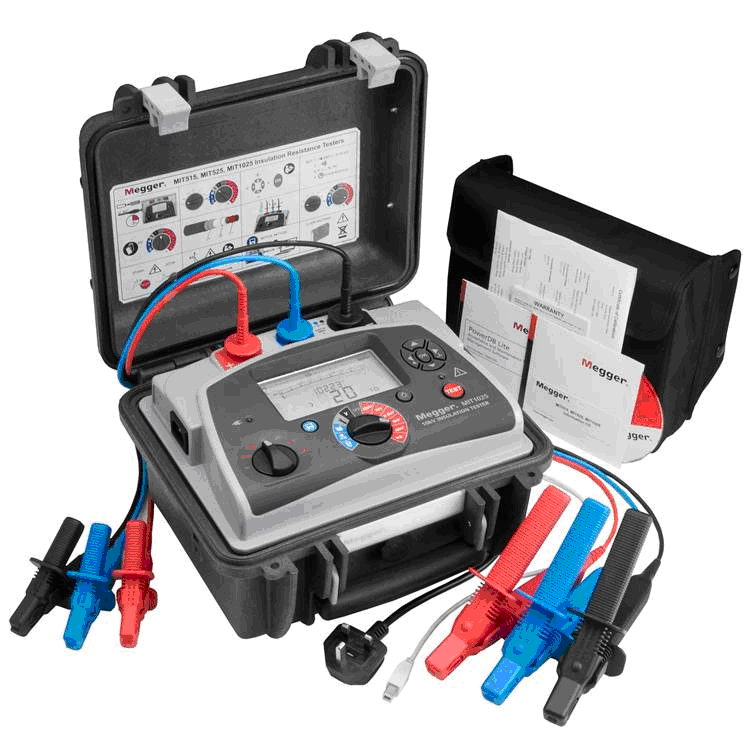 Megger’s new high-voltage insulation resistance testers (IRTs) offer exceptional versatility in a compact, rugged and light unit that weighs little more than half as much as its predecessors. Capable of providing accurate measurements up to 10 TO for 5 kV versions and 20 TO for 10 kV versions and having facilities for automatic timed IR tests and more advanced diagnostic tests; PI, DAR, DD, SV and ramp tests.

The new instruments also provide enhanced productivity – they can be used from an AC source even when their internal rechargeable battery is fully discharged – and they are capable of delivering dependable results even in noisy electrical environments, such as electricity substations, with noise levels up to 3 mA.

The MIT525, which is also a 5 kV unit, adds facilities for dielectric discharge (DD), step voltage (SV) and ramp diagnostic testing, as well as a large-capacity internal memory for storing time and date stamped test results, which can subsequently recalled to the display or downloaded to a PC via the instrument’s electrically isolated USB interface. Real-time output of results during tests is also supported. The MIT1025 offers the same facilities as the MIT525, but is a 10 kV unit.

The MIT515 and MIT525 allow tests to be carried out at five pre-defined voltages from 250 V to 5 kV, while the MIT1025 provides pre-defined test voltages from 500 V to 10 kV. All models allow an additional user-defined ‘lock’ voltage to be set, a specific voltage range to facilitate repetitive measurements to guard against excessive test voltages being applied to sensitive equipment.

Equally suitable for mains or battery operation, Megger’s new IRTs incorporate a user-replaceable rechargeable li-ion battery, which is automatically recharged when the instrument is connected to a mains supply. Discharged batteries take less than 2.5 hours to fully recharge and, when fully charged, they provide up to 6 hours of testing at 5 kV and up to 4.5 hours at 10 kV.

Other key features common to all of Megger’s new high-voltage IRTs include a large liquid crystal display with automatic backlight, a dedicated voltmeter function covering the range 30 V to 660 V, and a CAT IV 600 V safety rating in line with IEC 61010.

The instruments are supplied as standard with test leads and clips, and a user guide on CD-ROM. Additionally, for the MIT525 and MIT1025, a USB cable is provided together with a copy of the Megger PowerDB lite software package, which is a convenient and versatile tool for storing, analysing and reporting test results.

Carbon8 Lighting Provide Illumination at Autosport International in more ways than one!!