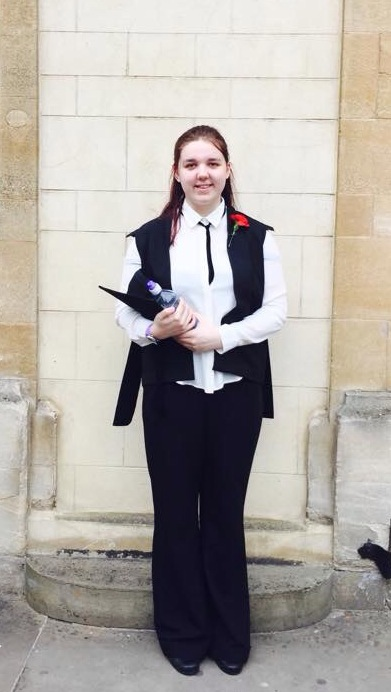 Chloe Adams-Pickford is a second year student at Oxford University studying General Engineering – she talks about why she wants to be an Engineer and the support she has received so far.

Have you seen Apollo 13? I know it’s a Hollywood blockbuster with an A-list cast but I watched it when I was 12 after a visit to NASA in Florida and I knew then that I wanted to be an engineer.  There’s a bit in the movie where there is potentially deadly levels of carbon monoxide filling up in the space ship.  They can’t change the filters as they only take square cartridges and the ones the astronauts have are round. The engineers at NASA literally have to work out how to fit a square peg in a round hole. So they get a box of different equipment they know is available on the spacecraft and sit around a table together to solve the problem. I remember watching that thinking how creative, inventive and important their jobs were. It opened up my mind and I realised that I had taken everything for granted. There is so much that is engineered in our lives and I then wanted to know how things were put together and why they worked.

In order to pursue my engineering dreams, I studied a wide range of STEM subjects including A levels in maths, further maths, physics and chemistry. My favourite subject at school had always been maths. The modules I enjoyed the most were the mechanics ones where I could see how maths was being applied and meant I could visualise the problems. I organised a week’s work experience at an engineering company to start at the end of my Year 12 studies. This exposure further cemented my love for engineering and I knew it would be an exciting career choice as it includes the maths and physics theory I enjoy so much. After successfully completing my A Levels, I went on to take up a place at the University of Oxford where I now study Engineering Science.

While still in sixth form I began to look into the support available to me for my university studies. I came across the IET Diamond Jubilee Scholarship scheme which is now in its second year. The scholarships provide each winner with at least £1,000 per academic year. All the winners also benefit from mentoring and work experience placements through the IET’s extensive networks.

I found out that sixty-nine scholarships had been awarded to other engineering students who started either a Masters or an Undergraduate engineering degree at a UK based university in the autumn of 2014. Nearly half of these (42%) have been awarded to female candidates up from just 19% of scholarships which were given to female applicants last year.

I received the first instalment of the IET Great Exhibition Scholarship in January 2015 and I haven’t spent a large amount of it just yet. I plan to use the money to fund a trip to Swaziland next summer where I will be helping to plan the infrastructure for a tourist community. I’m passionate about using my skill set to support people in other countries who may not be as fortunate as me.

Aside from the finances, the scholarship has opened up a number of societies that I have been able to get involved with. One that I have particularly enjoyed is Stemettes, an organisation which encourages and inspires women to enter STEM industries. Without the scholarship I may not have been aware of this fantastic group through which I have learnt so much and met other young aspirational engineers. This has been an invaluable part of the scholarship for me. The work that organisations such as Stemettes and the IET are doing to encourage more girls into engineering is important. Only 6% of the workforce are currently women and that has to change. It’s important that girls are aware of the support available to them when they enter the industry, like the Diamond Jubilee Scholarship.

The IET Diamond Jubilee Scholarship programme is open to all UK students hoping to achieve 3 ‘A’s at A Level, 3 ‘A’ grade Advanced Highers, 5 ‘A’ grade Highers or an International Baccalaureate Diploma at 36 points or above and who are applying to join an IET accredited engineering or technology degree course.  Those who are selected receive at least £1,000 per year during their studies. There is a lot of support for those training to be engineers so I would encourage anyone who is thinking about a career in engineering to apply.

I’m conscious that I didn’t tell you if the NASA engineers were able to create a solution to the problem in the spacecraft. If you know the story of the Apollo 13 then you’ll know the answer. If not, then watch the movie, it’s great. Be warned though, it may make you want to be an engineer.

To find out more about the IET Diamond Jubilee Scholarship, visit: www.theiet.org/diamond

Working on powered gates – warning to electricians from DHF

Towards perpetual equipment by avoiding batteries