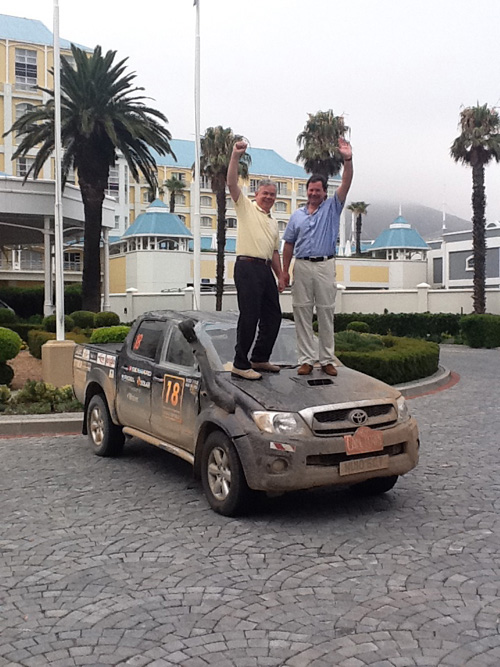 Seaward’s Rod Taylor has started the year in top gear after driving nearly 9,000 miles to raise money for a life saving charity.

Rod Taylor, managing director at electrical test and measurement manufacturer, Seaward, has driven nearly 9,000 miles and travelled through 12 countries in one month to raise money for the charity WaterAid.

Taylor was participating for the first time in the London to Cape Town World Cup Rally and, along with co-driver Ian Morgan, surpassed all expectations by finishing 11th out of 48 competitors and in the process raised more than £10,000 for Water Aid, an international non-governmental organisation that transforms lives by improving access to safe water, hygiene and sanitation in the world’s poorest communities.

Describing the experience as the ‘adventure of a lifetime’, Rod’s journey, however, was not all smooth going. As well as overcoming the mountain roads of Italy and Greece and the dirt roads of Africa, the pair steered their Toyota HiLux 4×4 through some of the toughest driving conditions imaginable and even managed to carry on after rolling the car in Tanzania.

Saved by the car’s roll cage and helped by their rally competitors, they got the car back on four wheels and managed the remaining journey reaching Cape Town on 29th January.

Taylor said, “The one image that will stay with me is the faces of the many smiling children that have lined our path and waved us on our way.

“We have seen some of the poorest places and it is fantastic to think that the generous contributions made by colleagues in the electrical industry will go some way to improving lives in those villages. I would like to thank everyone for their fabulous support.”

AM2 hints and tips