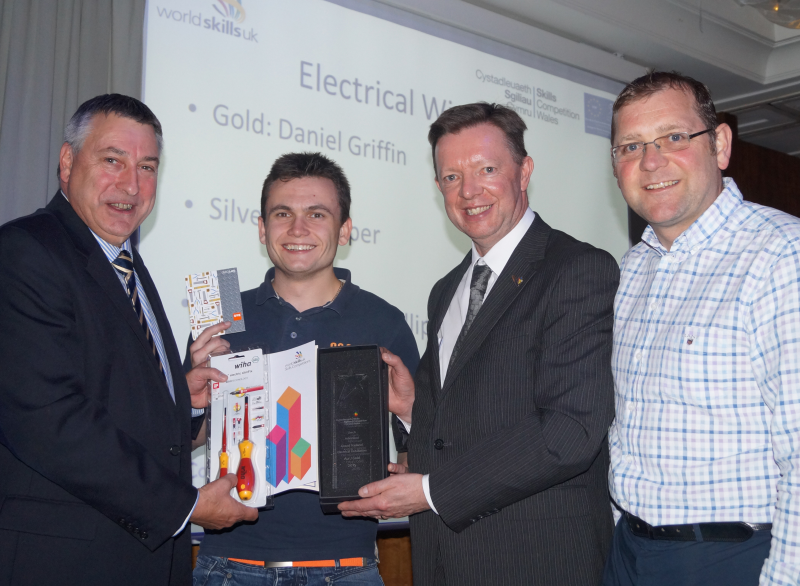 Top skills were on display recently with the first SkillELECTRIC heat of the year taking place in Wales. The top accolade went to apprentice Daniel Griffin, who was named champion after scoring most highly against 10 other competitors.

Daniel stood out amongst his peers at the busy event hosted at Coleg Cambria, in a task specially developed for 2015 to be more challenging than previous years’ events.

All competitors had to tackle a complex PVC conduit and trunking installation enclosing PVC single cables for a socket outlet and two lighting circuits. Judges awarded Daniel with the most points against tough criteria including installation quality, positioning of equipment, function and inspection & testing.

Speaking of his win, 19-year old Daniel said: “It was amazing hearing my name being called out as the winner – it’s always really difficult to judge how well you’re doing, as the other guys also have done a great job. I’m really pleased to have done well and am looking forward to the next stage.”

Three further heats will take place across England during May and June. The highest scoring candidates across all heats will be invited to the SkillELECTRIC UK final held in November at the prestigious Skills Show at the Birmingham NEC, the UK’s largest skills and careers show with over 80,000 visitors.

The Joint Industry Board (JIB) and NET are the lead sponsors of SkillELECTRIC. Stephen Plant, technical development manager at NET, congratulated all competitors at the event. “I’ve been really impressed by the performance and standards demonstrated by all the candidates,” he said. “Well done to all competitors and thank you also to Coleg Cambria who were excellent hosts and delivered a superb evening awards ceremony.”

To find out more about the competition visit www.jib.org.uk/skillelectric.aspx