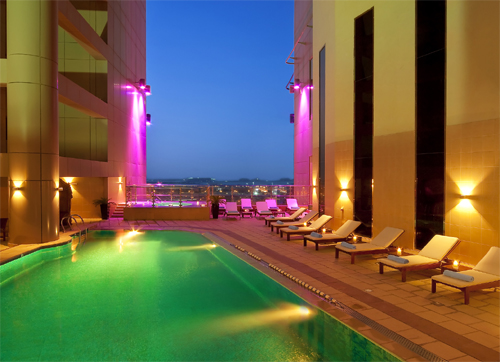 Installed by the BMS Division of Optima International LLC, the technology is helping the hotel negate the soaring cost of utilities in the United Arab Emirates.

Although Optima has had a presence in the Middle East for 20 years, the move into the UAE seven years ago prompted the company to source a new BMS partner. According to the company’s business development and commercial manager, Michael Scriven, Priva Building Intelligence was also looking closely at the UAE market, and “the match was made.”

Scriven said, “We pitched for the project based on the use of Priva BMS technology and it was the flexibility of the equipment that won the tender.”

As a new build project, Optima claims the client was clear on its original requirements, although it almost goes without saying that even the best laid plans are subject to change.

“One recurring theme with hotels is that they are a forever-changing environment,” explained Scriven. “In the blink of an eye, bedrooms change to conference rooms and bars change to restaurants, for example. This is where the flexibility of the Priva technology is priceless.”

Although hotels are fairly typical projects for Optima, The Grand Millennium is a particularly large facility. With the cost of electricity in Dubai currently around four times more expensive than in the UK, for example, the emphasis on effective building control is clear. In addition, the Dubai government introduced a fuel surcharge for electricity and water customers in 2011, with the intention of promoting efficient energy consumption.

“Energy is a government run utility and hence there is a lack of competition – electricity costs have doubled in the past three years and it’s the single biggest operating cost by far,” added Scriven. “This is exaggerated by colossal air conditioning costs in the summer months when the average outside temperature is 40°C. A BMS can save a fortune here by monitoring and controlling services such as lighting, water heating, ventilation and cooling/air conditioning thus ensuring they operate at maximum levels of efficiency and economy. This is achieved by maintaining the optimum balance between conditions, energy usage and operating requirements.”

The solution supplied to The Grand Millennium Dubai was based on the Priva Compri HX suite of products, principally the Compri HX 8E, which is well suited for managing large to highly complex automatic control installations. The base module has four serial ports which can be flexibly deployed to integrate other systems. What’s more, the Compri HX 8E is fitted with an Ethernet port for PCs, modems and displays. There is also a universal link for BACnet servers (BACnet MS/TP networks are deployed at the hotel).

“We are five years down the line and we’re now looking to install the latest version of Priva’s Compri HX WebEngine,” said Scriven. “This will provide extra functionality such as being able to monitor building controls remotely, and facilitate the subsequent installation of TC Energy.”