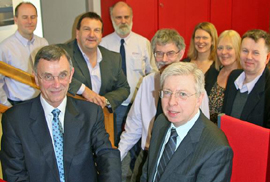 Sensor technology company Zettlex has celebrated the opening of a new production line at its plant in Cambridge.

General manager at Zettlex, Mark Howard, was joined by David Coates and Myrddin Jones from the UK’s Technology Strategy Board for the official opening alongside production staff.

Zettlex, which designs and manufactures a range of sensor technologies used in the industrial, defence, aerospace and medical sectors, is recruiting extra production and engineering staff to cope with rising global export orders. The company already exports to most countries in Europe, as well as the US, Canada, Australia and South Africa.

Howard commented, “Zettlex proves that if you’ve got a good product you can make it in the UK, and then export it all over the world. We have been delighted with the support we’ve received from the Technology Strategy Board, which does so much to support research and development in the UK – opening the way for companies to become world leaders. We are proud to fly the flag for Britain as an example of a company that is growing despite very challenging economic circumstances.”

Coates added, “We’re delighted that our initial support for Zettlex has led to real growth – both in economic and also employment terms. As an organisation driving innovation in the UK, we know that small companies need support at the right time to flourish. Zettlex is a great example of sustainable growth and development.”

Three women celebrated as Young Woman Engineers of the Year