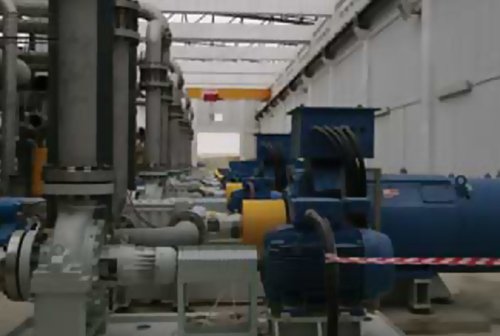 WEG has supplied 62 self monitoring motors for the recently opened 55,000m3/d Trekkopje sea water desalination plant in Namibia. The plant is the largest of its kind in sub-Saharan Africa and is a vital water supply asset in a country where 98% of the land is considered arid or semi-arid.

The WEG motors, ranging from 18.5kW to 750kW, drive pumps that are considered crucial to the plant’s reliable operation.

Designed and built by specialist water treatment firm, Keyplan, part of the Aveng Group, the Trekkopje plant converts sea water from the Atlantic Ocean into potable water for use at the large Trekkopje opencast uranium mine.

The desalination process entails extracting salt water via pipes that are placed one kilometre out to sea. The sea water is then pumped to the plant where screening and ultra-filtration prepares it for reverse osmosis, a process where a membrane selectively retains the salt, allowing the desalted water to pass through.

Keyplan considered a number of companies for the supply of the pump motors. However, the Zest WEG Group was chosen because of its technical expertise and the proven quality of WEG motors. “It is important that the motors complement the application and ensure maximum productivity coupled with minimal maintenance and down-time,” said Gavin Lee, Keyplan projects director.

While competitive pricing played a role in the decision making process, the value added service that the Zest WEG Group was able to offer was infinitely more important to the customer.

“This was especially pertinent in terms of the company’s ability to work closely with other suppliers to ensure a perfect product match as well as meet the deliveries according to scheduled timeframes,” said Lee.

The 750kW motors were fitted with soft starters while the remainder of the motors were combined with variable speed drives. All motors were supplied with anti-corrosion coating because of the corrosive nature of the environment. In addition, because the ambient air is very moist due to omnipresent fog, the installation of anti-condensation heaters in every motor was imperative to keep the motors heated and thus eliminate any moisture build-up and ingress.

Cable cleats – getting the message across

Take on a life-changing challenge in 2017

The growth and growth of the £3 trillion delivery industry