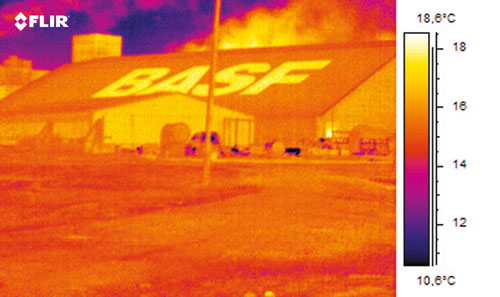 BASF is one of the largest international chemical groups in the world with more than 110,000 employees. Its Antwerp plant is the second largest of the company’s plants and for more than 15 years this site has been reliant on FLIR P-Series thermal imaging for trouble-free, 24/7 production.

Historically this task was outsourced. When the preventative maintenance programme was introduced however, and with the need to conduct inspections on a routine basis, the company decided to buy its own camera. This investment has already paid for itself many times over. It now has a full time thermographer who follows pre-defined routes and also responds to any calls for help in the event of a technical problem.

The FLIR P-Series camera is used for a wide variety of applications that extend from checking the integrity of insulation and level measurement to electrical inspection and process optimisation.

A spokesman for the Preventative Maintenance Department explained, “It’s the perfect tool for us. It gives us a full picture of the thermal situation in a non-contact mode and allows us to detect faults before they lead to real problems. As a result, we save BASF Antwerp at lot of time and money.”

More than 6,000 electrical cabinets are now examined at least annually and many problems have been discovered that could have led to fire. The ammonia plant is a particular focus where the maintenance team primarily looks at the temperature of pipes.

An abnormally high temperature is taken very seriously as it could indicate inadequate insulation or worse still, a leak. This is a potentially dangerous situation as not only does it require production to be suspended, it also brings the risk of explosion.

In the past these temperature checks were carried out with measuring probes but the advantage of FLIR infrared is that BASF can now measure temperature much more rapidly and without any contact. Engineers can also get a complete picture of the situation.

The maintenance team also uses its FLIR P-Series camera to conduct mechanical inspections. It has, for example, a large number of vertically positioned engines at the plant. Dust settles on their ventilator hoods which increases the operating temperature, leading to greater component wear. With the help of the FLIR camera, it is easy to tell when the dust needs to be removed. Another mechanical inspection example is in the production of fertilisers. Granulation occurs in the large drums so the FLIR camera allows maintenance engineers to spot alignment faults and other defects through abnormal thermal profiles.

Each of the team’s findings are of course committed to a report with full thermal data and a visual image and emailed to the department concerned. This provides everything that is needed to allow an informed decision to be made on remedial action.

The FLIR camera also allows the team to undertake process optimisation tasks. The heat exchangers involved in the production of ethylene oxide, for example, are regularly examined. The infrared image provides visual evidence of any blockages and deposits so they may be cleared to improve performance.

Another role for the FLIR P-Series camera is checking new plant for compliance with specification and standards. And to ensure safety, the temperature at a number of critical locations is taken regularly and the settlement level in chemical storage tanks is also checked.