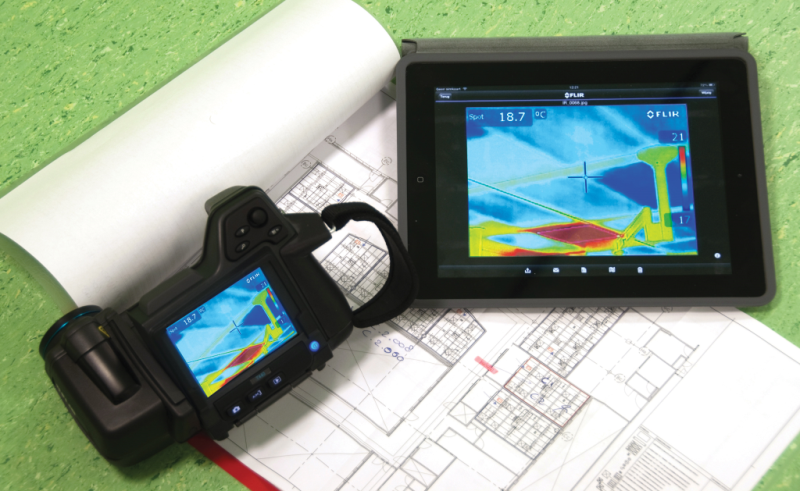 Climate control ceilings are becoming increasingly popular in modern building design for many reasons. From an architectural standpoint they allow the climate control of the indoor environment to be invisibly integrated into the structure of the building, providing considerable flexibility in layout and design. The building’s inhabitants benefit from uniform temperature, high acoustic comfort and low air speeds resulting in minimal draught and dust displacement.

Most systems have a long life-span of more than 20 years and are generally maintenance-free and exceptionally energy efficient. But, in order to deliver these advantages, climate control ceiling elements must be properly installed and this is where the diagnostic ability of Flir thermal imaging is proving essential.

Inteco BV is a specialist in the design and implementation of climate control ceiling and ceiling induction units and was recently commissioned to incorporate this technology into a new building at the Bernhoven Hospital in The Netherlands. A total of 1200 square metres of climate-controlled ceiling were installed and in order to ensure all the elements had been correctly fitted and were working optimally, Inteco called on an independent thermal imaging consultancy to provide that verification.

Bas Coolen, a senior thermographer from Thermografisch & Adviesbureau undertook the work with a Flir T440bx thermal imaging camera which has several features that make it especially suitable for building inspection. 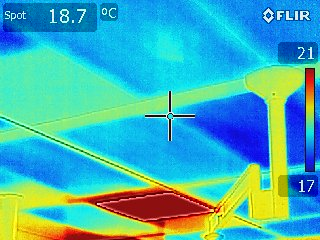 The climate control ceiling in the Bernhoven Hospital is the MeandRo system developed and patented by Inteco.  This is a radiant ceiling for cooling and heating, using the passage of both hot and cold water and consists of perforated sheet steel ceiling panels in a sandwich construction, factory-equipped with a MeandRo element.

Elements are attached to each other using quick links and it is here where mistakes can be made during installation. Poor connection means the desired interior climate cannot be achieved but with the safeguard of a thermal imaging check, such errors can be quickly rectified. Another problem that can arise during installation is insufficient supply of hot or cold water, causing improper functioning of the ceiling, but this too can be detected by the infrared camera.

“Temperature differences in the ceiling can be seen quickly with thermal imaging and with the new MSX, multi-spectral imaging function, on the Flir T440bx, it’s easy to orient yourself to see exactly which elements you are inspecting,” Bas Coolen explains.

Previous generations of thermal imaging cameras have featured ways to blend, overlay or fuse a portion of a thermal image into a visible light picture.  These modes have only provided a partial solution, however.  They also took longer to apply and interpret and had a tendency to limit or obscure the thermal view of the scene.

The MSX development is a completely different technology. It embosses digital camera detail on the video and stills, providing much better visible results without diluting the thermal image. Orientation of the target is easy, reports are clutter-free and all of these elements contribute to faster and more efficient inspection. 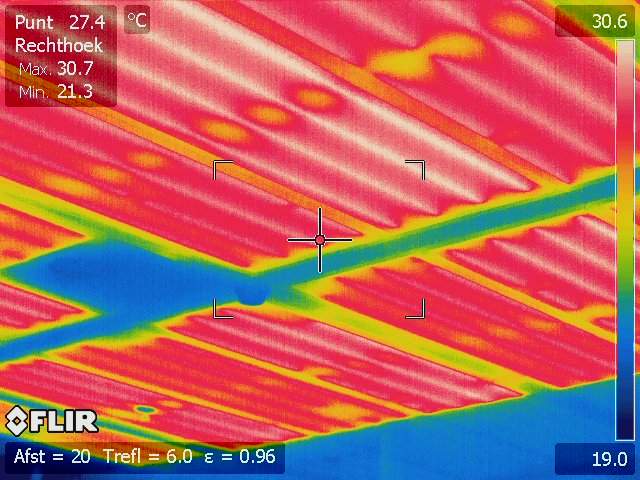 Bas Coolen continues: “We often see climate control ceiling installers conducting the inspections themselves with the aid of spot pyrometers. There’s nothing wrong with these devices but it’s a time-consuming inspection method as a spot pyrometer only provides a temperature measure at a single point. In addition, there is no visual record of the measurement. By contrast, with a thermal imaging camera, a significant surface area of the climate control ceiling can be inspected in a very short time and it is clear to see whether the elements are working as they should be.”

The Flir T400bx combines good ergonomics with high quality imaging at 320 x 240 pixels. As is characteristic of the Flir T-Series, it is equipped with a tiltable optical unit that allows imaging at any angle.  It also has a built-in compass which allows the camera’s direction of view to be added to each thermal image.

“Thermal imaging technology has already proven itself in many different applications,” Bas Coolen concludes. “But its use for climate control ceiling inspection highlights its ability to identify problems quickly and clearly so they can be resolved without delay. In this particular application, the technology has helped to minimise any post-installation problems at the hospital that would not only interrupt its smooth running and inconvenience staff and patients but also incur additional costs.”