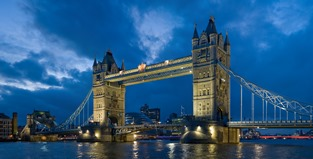 Eight Pressductor load cells from ABB are helping to ensure the 120-year old pivot bearings of Tower Bridge are kept in good condition.

Opened in 1894 in response to the commercial development of London’s East End, Tower Bridge has become one of London’s most instantly recognisable landmarks. Featuring a twin bascule design, the bridge provided an ingenious solution to the problem of enabling the River Thames to be crossed without hindering the access of tall-masted ships to the port facilities in the Pool of London between London Bridge and the Tower of London.

The central 200ft span of the bridge is split into two bascules (French for ’see-saw’), which can be raised to an angle of 86 degrees to allow the passage of tall boats and ships to and from the Pool of London. Each bascule weighs 1,200 tonnes and is counter-balanced to help reduce the force required to lift them.

Part of the bridge-lifting and lowering system is comprised of pivot bearings at the shore-end of each bascule. If the bearings become worn, replacing them would require closure of the bridge, resulting in major traffic difficulties in central London.

Thanks to the accurate measurement delivered by ABB’s Pressductor load cells, senior technical officer Peter Brown has no intention of changing the sixteen main bearings, consisting of 75 mm roller bearings around a 533mm shaft, anytime soon.

“Despite their age, the original bearings are in pretty good condition. With the help of jacks under the counterweights, and the load cells under the bridge span, we ensure there is a 5 mm gap between the bearing and the pivot shaft, preventing the weight of the span from resting on the bearings,” he said.

The load cells are integrated into the eight resting blocks that support the spans when the bridge is closed. With the bridge in its lowered position, each resting block takes a weight of approximately 220 tonnes. As the bridge closes, the load cells indicate the overall load across the width of the bascule.. When the load approaches 220 tonnes, speed is reduced to prevent overloading the pivot bearing. If the load were to reach 500 tonnes, the control system would automatically stop, preventing any damage to the bascules or bearings.

Since the ABB Pressductor load cells were installed in 2002, they have helped control over 10,000 bridge openings. They have also seen significant traffic pass over them.

“Over 40,000 people cross the bridge every day, either by foot, bike or car. The weight limit on the bridge is 18 tonnes but I have personally seen 40 tonne vehicles cross,” said Brown.

Unlike other types of load cells, the ABB Pressductor is not dependent on physical movement or deformation. Instead, it consists of high-strength stainless steel laminations bonded together under high temperature and pressure with an extremely strong oil and chemical resisiatnt epoxy adhesive, making it exceptionally durable. When a force is applied to the load cell, its magnetic properties change, producing an output signal. This is converted to a readout on a monitor in Tower Bridge’s control centre, from where the bridge is raised and lowered under manual control.

Originally powered by steam, the bridge’s raising and lowering mechanism now uses four 35kW electric motors powering hydraulic gear mechanisms that move the bascules and also move the resting blocks into position. Despite the weight of each bascule, they can be opened in just 90 seconds with very little power thanks to the bridge’s counter-balance design. The four electric motors provide ample redundancy and the bridge could in fact be opened with just one, though this would take longer than normal.

ABB’s Pressductor load cells are part of its wider offering of devices designed to withstand impact loads and high overloads in heavy industrial applications without a loss of accuracy.