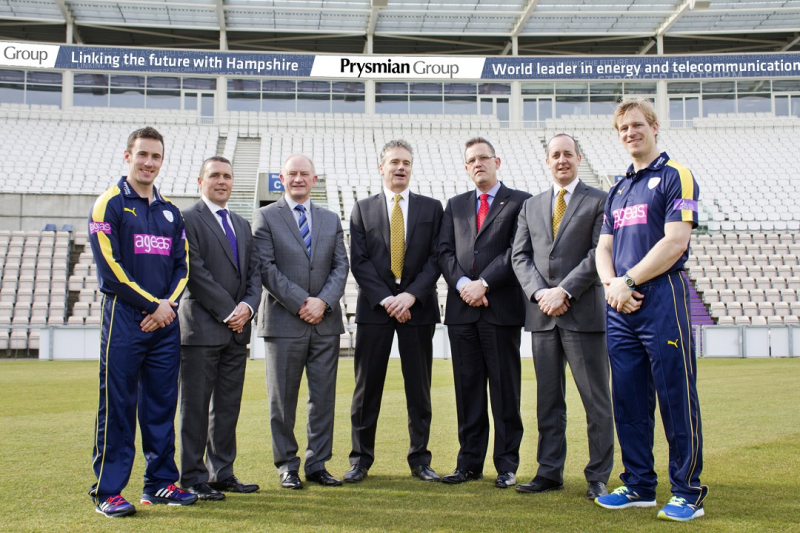 Prysmian Group has announced a major sponsorship deal with Hampshire Cricket as part of its programme both to support its local community and to build an international awareness of the Prysmian brand.

With its UK headquarters in nearby Bishopstoke, Prysmian Group is exploring a range of options to support community activity aimed at younger people.  Prysmian was immediately attracted by Hampshire Cricket’s extensive training programme designed to identify and encourage talented young cricketers throughout the county.

At the same time, the worldwide audience for the televised one day matches provides enormously valuable awareness for a brand which is always looking to attract the most talented young people into its businesses around the globe.

As part of the sponsorship deal, Prysmian Group played a key role in providing the cable system for the new 171-bedroom four-star Hilton at the Ageas Bowl, Southampton.  The company will now benefit from branding on the high-profile Shane Warne stand in the ground and on Hampshire’s new Royal London One-Day Cup playing shirts.

Speaking at the Hampshire Cricket 2015 Press Day, Prysmian CEO Paul Atkinson summarised: “This is a great opportunity for us to participate in a world-class sporting arena that also supports our local community.  For us, that was a compelling offer.”

Ageas Bowl commercial director, Stuart Robertson said: “We are delighted to be able to announce this exciting new sponsorship deal and hopefully this is just the start of an excellent relationship between Hampshire Cricket and Prysmian.”

Padding up with Prysmian at Old Trafford