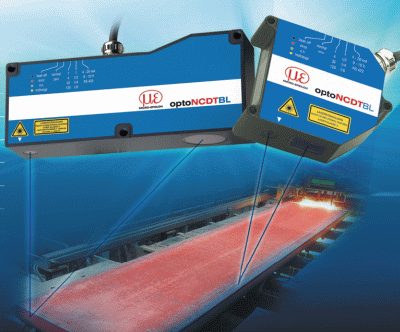 Micro-Epsilon has introduced its new optoNCDT 1700BL series of Blue Laser Sensors which operate on the laser triangulation measuring principle and use blue (violet) laser technology. The sensors are well suited for measurements on hot, glowing metals, particularly in hot steel processing applications, as well as for measuring organic materials such as skin, foodstuffs, plastics, veneers and wood.

With red, glowing objects, a conventional red laser has a high signal interference from the object surface, because it emits the same or very near wavelengths of light as the red laser. However, the blue laser works at a wavelength of 405nm, which is far from the red part of the visible spectrum. This means it is easier to filter this type of emitted light from the object, which ensures very stable signals.

This is a particular advantage when it comes to measuring the wear or deformation of automotive brake discs under load, and also when measuring against translucent objects such as organic materials, paper, some plastics and wood veneers. Unlike a red laser, the blue laser light does not penetrate into the measuring object because it has a lower intensity laser spot and therefore offers more stable, precise measurements on targets that conventional red laser sensors have difficulty measuring.

Micro-Epsilon’s Blue Laser Sensors are equipped with new high end optical lenses, a new intelligent laser control and evaluation algorithms. The sensors are suitable for red glowing metals up to 1,600°C, and for silicon up to 1,150°C.

The optoNCDT 1700BL operates using the laser triangulation principle. A laser diode projects a visible point of light onto the surface of the target object. The light reflected from this point is then projected onto a CCD array. If the target changes position with respect to the sensor, the movement of the reflected light is projected on the CCD array and analysed to output the exact position of the target. The measurements are processed digitally in the integral controller. The data is output via analogue (I/U) and digital interface RS422 or USB.

The optoNCDT 1700BL series includes six sensor models with measuring ranges from 20mm up to 1,000mm. The measuring rate of the sensor can be adjusted up to 2.5kHz and can be used as a freely programmable limit switch. Maximum linearity is 16mm and maximum resolution is 1.5mm at 2.5kHz (without any averaging). High flexibility cables can be provided for use with robots, and a calibration certificate is included as standard.

BASEC puts cables to the test