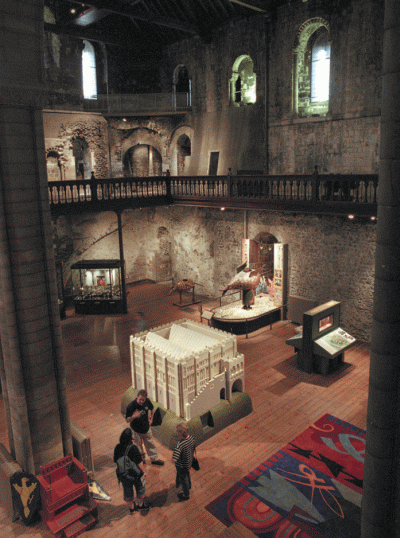 Norwich Castle Museum and Art Gallery and the Royal Norfolk Regimental Museum has replaced its existing fire protection with an open protocol system from Apollo. T&P Fire, which has represented Apollo for more than 15 years, has always advocated the open protocol approach, because of the flexibility of product choice and better whole life costs that it offers.

James Carswell, cabinet member for Cultural Services at Norfolk County Council, said, “Norwich Castle Museum and Art Gallery is so much more than just a building. It is a treasured part of our community loved by visitors and staff alike because it brings to life our heritage in a space fit for the 21st Century.”

Norwich Castle, which was built by the Normans 900 years ago, is both a Scheduled Monument and a listed Grade I building. Today, the museum and art gallery houses collections of fine art, archaeology and natural history. In addition, attached to the castle by a First World War Communication Trench, is the Royal Norfolk Regimental Museum.

T&P Fire was appointed to supply, install, commission and maintain the new fire detection system. Installation was required on a like for like basis, and using the existing loop wiring. The work was programmed around the building’s occupants and requirements, mostly taking place during normal working hours.

The fire system replacement was split into two main areas – the Castle Museum and the Regimental Museum, Shirehall and Chambers at street level. More than 700 Apollo analogue addressable devices, including smoke and heat detectors, carbon monoxide detectors, audio visual devices and interfaces, have been installed altogether.

Within the Castle Museum and Art Gallery, around 300 Apollo Discovery fire detectors are configured across seven loops controlled by an Advanced Electronics Mx4807 panel. Nearly 100 interface devices allow the fire system to interact with other building systems, such as the sprinkler system and the Public Address Voice Alarm system, as well as access controlled doors and other critical plant. The main point fire detection system also interfaces with aspirating smoke detection which has been installed to protect the building’s large ceiling voids and the main castle keep.

The Regimental Museum and Shirehall are protected by a two loop fire system, again based around an Advanced Electronics control panel, and incorporating 130 Apollo devices, while the Chambers has a four loop system that includes more than 200 Apollo fire detectors, sounder beacons, base sounders and interfaces.

Designed to meet L1 standards, the fire systems offer a phased evacuation, with an alarm signal being raised in the affected area only.