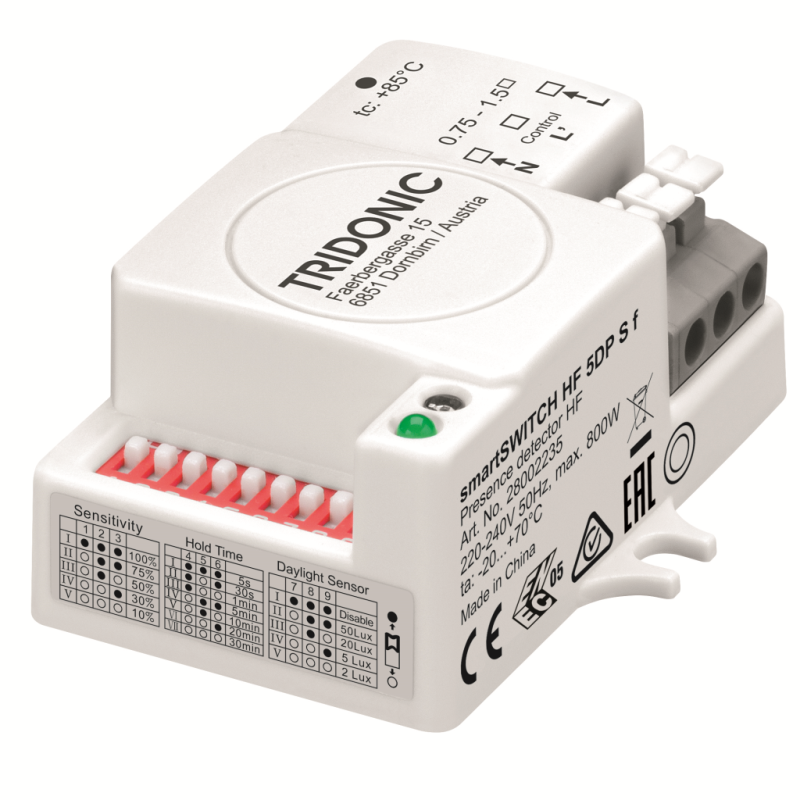 With the new smartSWITCH HF 5DP f and HF 5DP S f switch sensors for luminaire fixtures, Tridonic has extended the detection range for presence and ambient light compared with the previous model. The sensitivity of the sensors can now be adjusted from 100 to 10% as required. This prevents the light from being switched on unnecessarily because the detection range is too large.

In addition to the detection range, a threshold for the ambient light and the delay time before switch off can also be set by the nine dip switches in the sensors. The bright-out function prevents the light being switched on if the illuminance of the daylight is sufficient. The light only switches on if the sensor detects the presence of people and the ambient light is too weak. To prevent the light being switched on and off too often, automatic switch off can be delayed. The delay time before switch off begins after the last movement in the detection range and can be anything from 5 seconds to 30 minutes.

The switch sensors have a maximum mounting height of 5 metres but the largest detection range is achieved when the sensors are mounted at a height of 3 metres. With different housing dimensions (70 x 36.5 x 24.5 mm and 58 x 48.5 x 24.5 mm), both sensor models are suitable for various luminaires. A mounting frame means the sensors can be mounted directly in the luminaire housing. The sensors are particularly easy to install in modules that are already fitted with corresponding recesses for mounting, for example the CLE G3 ADV LED module. Thanks to the microwave technology, the sensors are also suitable for closed luminaires, because the high-frequency waves penetrate glass and other thin materials (except for metal). Combining the sensors with the relevant LED drivers and their integrated functions, such as corridorFUNCTION, creates a sophisticated and cost-efficient lighting solution.