Knowing the Good, the bad and the ugly

LED seems to be the only type of lighting available when you look at any trade counter or publication, yet it currently stands at approx. 20%-30% of lighting sold. It is forecast to rise to in excess of 70% of lighting sold and in some applications as high as 90% of sales.

Whilst it is definitely here to stay and obviously will only increase its market share, because it is relatively new and developing technology, LED can be difficult to understand and specify, resulting in some people being reluctant to use it or even worse, making an ill informed decision.

LED is often thought of in a very generic way, that all LED is the same. But far from it, and knowing a few basic principles will help to choose between the good, bad and ugly.

First consideration is the LED chip itself, massive improvements in efficiency and light output in recent years have driven the boom in LED lighting.  Currently chips are available in the range of 100-150 lumens per watt, but chips with double those figures are being developed and expected to be available within 2-3 years. Contrast that with around 20 lumens per watt, 10 years ago and it is easy to see why the LED market is growing so fast.

LED chips are typically packaged in an array, with each individual ‘die’ being about the size of a pin head, with the array covered by a phosphor coating. The phosphor is typically a yellow colour and it helps to filter out the potentially harmful blue light naturally emitted by the LED’s and also converts it to a colour appearance required, warm white, cool white etc.

It is impossible to have a manufacturers name printed on something so small, but a reputable luminaire or lamp supplier will be able to provide the specification details of the chips used. Ideally, these would include figures from an LM-80 report. LM-80 is an IESNA (Illuminating Engineering Society of North America) test method that is used to predict life of the LED. It will typically contain figures for different running temperatures and these should be cross referenced against the actual product temperature as heat is a major factor in reduced LED life. Failure to do so may result in misquoted figure as life of the actual product is not necessarily the life quoted by the LED chip manufacturer.

Well-designed and bespoke LED luminaires will have taken the thermal needs of the LED into account and ensure they operate within their optimum temperature range. However, there are many ‘LED luminaires’ available that have simply used existing housings and changed the internal components from fluorescent or HID to LED. Whilst it is possible that this could result in a luminaire that functions, it is unlikely to perform as well as product designed specifically for LED. So, it should be considered as although using existing parts can keep the cost down, the trade-off will likely be the need to replace earlier so an initial cost actually ends up costing more in the long run.

With a good quality LED chip in a well-designed luminaire with good thermal management, the LED should operate for the quoted duration, provided it receives power. The driver is a key element that is often somewhat overlooked in favour importance placed on the LED chip brand, but without a high quality driver, the chip will not reach its expected life. The components used in poorer quality drivers will fail, long before the rated life of the LED.

LED luminaires are particularly suited to applications where they are used for long hours or are difficult to access, as they require little or no maintenance or where instant 100% light is required. 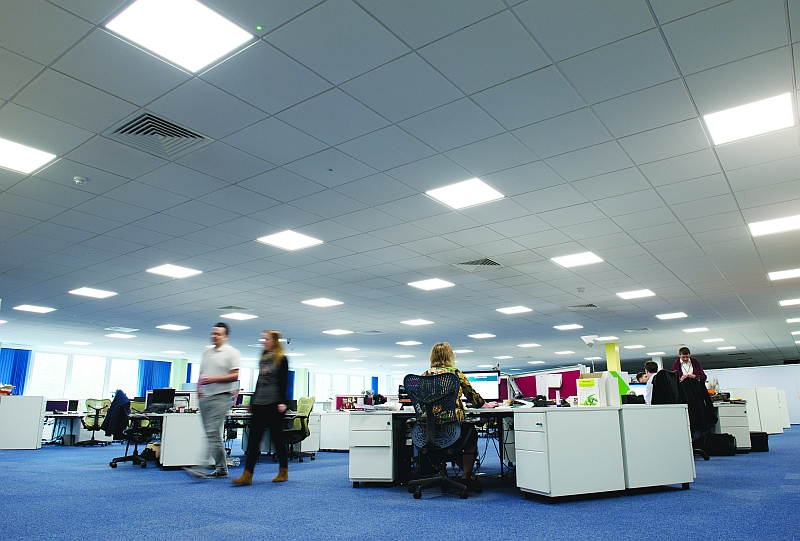 One very popular application has been to use LED panels in office environments. The typical fluorescent modular luminaires in a suspended ceiling grid were designed and intended to reduce glare on computer screens. But as result, they had very sharp cut off angles, where they limited the direct spread of light. This created a very oppressive working environment as walls and ceilings received little illumination and it could create the effect of lowering the ceiling. Whilst efforts were made to revise guidance documents to improve the effect, often it was not practical to include extra luminaires to direct light to the ceilings and walls.

LED panels do not have the louvres that fluorescents used to control glare as the LED’s are not directly visible and when used in conjunction with high specification diffusers, the spread of light is far better and more even. This creates a light and airy workplace and also improves on the illumination directed to walls and ceilings to the extent that most installations using high specification LED panels can meet the latest revision of Lighting Guide 7: Office lighting (LG7) that is virtually impossible with fluorescent recessed modular luminaires alone.  It is possible to save 60% in energy costs with the latest, high specification LED panels. 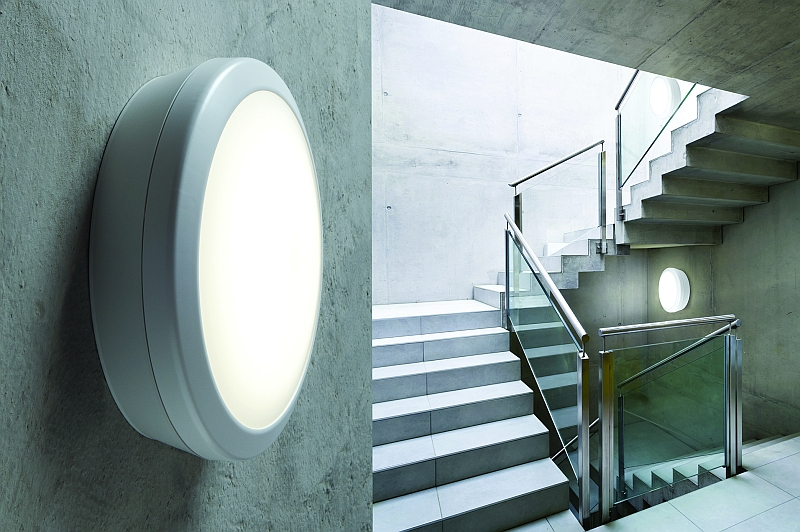 The frequent switching ability and instant light output of LED’s makes them also ideal choice for bulkhead luminaires where compact fluorescent lamps have been widely used. This is a product type that is widespread with re-vamped fluorescent housings being used for LED, so performance can vary wildly. But a bespoke LED bulkhead will not only reach optimum life but can also be switch frequently without any detrimental effect on life unlike a compact fluorescent lamp.

Distribution centres and warehouses are applications that due to their size and long operating hours are also ideal for LED. Highbay luminaires can replace Metal Halide on a 1-for-1 basis with a 200watt LED replacing a 400watt, providing a 50% energy saving. This can save a business not only huge amounts of energy and being the easiest and largest opportunity to reduce their co2 emissions, but also removing the need for regular re-lamping means the business can function without shutdowns and expensive access equipment.

Exterior applications also provide great applications for LED and floodlighting specifically. As the floodlights are typically difficult to access to change lamps.  Also, due to instant light LED’s are ideal for security applications and can give 90% savings against tungsten halogen luminaires

Choose the right luminaire for the right application and LED is a good choice. But choose a badly conceived product and sooner or later the result will be ugly.

For more information on the good LED products contact Luceco on (01952) 238100, email sales@luceco.uk or visit www.luceco.uk

Cable glands and trunking – perfectly matched to the application