Hoppecke Industrial Batteries is having “confidential” discussions with some major OEMs and rail infrastructure providers following its highly successful participation in the recent Railtex 2017 exhibition. 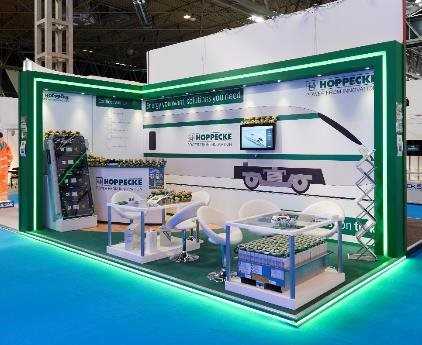 While no details can be provided at this stage, Hoppecke has revealed that it is talking to some organisations that it has never worked with previously. At the same time, the company received many promising enquiries at Railtex for its reserve power product range which provides auxiliary power systems to electrified equipment.

Hoppecke – the leading specialist in industrial battery systems and the largest battery manufacturer in European ownership – chose Railtex to give a UK debut to its high voltage Lithium-Ion (LiOn) battery designed specifically for use in locomotives with hybrid drives. Through hybrid technology the battery enables smaller diesel engines to be fitted to trains so it can deliver fuel savings of around 40 per cent while reducing CO2 output.

Charged by a train’s on-board diesel generator, the LiOn battery is capable of 850kW peak power (600kW in normal operation) and its modular design featuring 24V or 133V units means it can be expanded easily to provide even better performance.

The new battery is also designed for use inside factories and tunnels, so it has a special fire-proof housing with combustion gas purification and a built-in air conditioning system to ensure full power even in extreme operating conditions.

Says Jason Howlett, Hoppecke‘s Regional Managing Director – Northern Europe: “Railtex proved extremely valuable for us in that we were able to showcase our LiOn battery and demonstrate many others from our product range. As usual, we took a lot of great leads at Railtex and we are currently in the middle of several key discussions with providers of rail infrastructure as well as some major OEMs. Watch this space.”

Havells gets into gear at Volkswagen Watford

Futureproof your buildings – and your investment