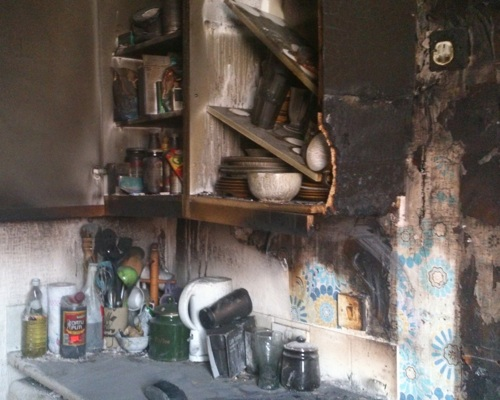 Significant structural fire damage and potential loss of life have been avoided following the fast and orderly evacuation of a block of five apartments in Blackpool following a fire.

The fire started in a kitchen area one evening, after which the Fike TWINFLEX smart 2-wire fire detection system instantly raised the alarm and its alarm confirmation facilities ensured a fast and safe evacuation of all the tenants before the escape route became compromised. The fire brigade arrived in time to put out the fire before significant damage was caused to the rest of the building.

The fire detection system was designed and installed by DD Fire Alarms, a company specialising in providing dependable and cost effective alarm systems for houses of multiple occupation (HMOs) and hotels.

The TWINFLEX control panel is mounted in the entrance hall and is connected to 26 Multipoint detectors, which are installed in the five apartments and communal areas. Each Multipoint detector can be configured to any one of seven detection modes, allowing it to be closely matched to its surrounding environment.

In the case of this apartment block, the detectors in the dwellings were set to low sensitivity smoke to reduce false alarms, apart from the kitchen area, where the detector was set to heat mode. The smoke detectors in the communal areas were set to a higher sensitivity, allowing for a faster response. In addition to multiple detection modes, each Multipoint detector can include an integral 90db sounder, further increasing the flexibility and reducing the installation costs of the system.

“The building is wired on separate zones with alarm confirmation delays programmed so the alarm in the rest of the building is only raised if there is a genuine fire in one of the flats,” said Darren Johnson, managing director of DD Fire Alarms. “This ensures false alarms are all but eliminated. In fact in the two years the Fike TWINFLEX system has been installed there has only been one false alarm and that was from a tenant activating a manual call point.”

The alarm confirmation technology built into the TWINFLEX panel has proved to be very popular with HMOs. Zones are designated either ‘dwellings’ or ‘communal’. The system has the ability to set a pre-alarm for dwellings, allowing time to investigate the cause of the activation before evacuating the building.

This can be programmed between one to five minutes. Activation in a communal area will initiate a full alarm immediately. When a fire is detected in a dwelling only the local (room) sounder will operate during the alarm verification period to warn the occupants within that particular dwelling. If the detector is still generating an alarm signal after the configured pre-alarm time, the control panel will instantly sound all alarms in the building for full evacuation. This approach ensures safe evacuation in the event of a real fire, as demonstrated here, but doesn’t cause disruption from false alarms.