Electricians can save time with new iPad App 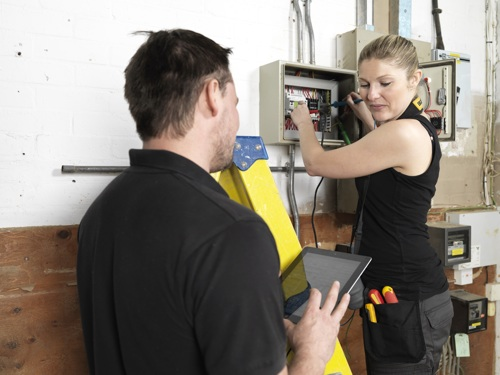 NICEIC has teamed up with software developer Clik to create an App which allows electrical safety certificates to be issued on an iPad.

The existing NICEIC Certification Software developed by Clik is the official electronic certification (e-cert) for NICEIC registered contractors, and the new iPad App is an extension of this software. By having the option to produce certificates on a tablet, certificates become quicker and easier to complete.

Using the new certification App, contractors can create new or import existing blank or part completed certificates to their iPad for completion on-site. They can then save and upload the certificate to the Clik cloud server when they are in range of an internet connection. Certificates can then be downloaded into NICEIC Certification Software for printing, verifying or completing.

Geoff Adams, managing director of Clik, added, “We are proud to be an NICEIC partner and have worked with them to create the new iPad App to make the working day easier for electrical contractors. This App allows certificates to be completed on-site using a handy tablet device.”

More NICEIC certificates will be introduced in order of popularity and released as freely downloadable updates. Clik has already planned functions such as zooming in and out of certificates and emailing certificates to customers as a PDF to enable clients’ signatures to be captured.

The Clik iPad App is free to download and try out, but to complete any official certificates you need to be using NICEIC Certification Software and have a valid update subscription. The software costs £255.32 (plus VAT), which includes one year’s technical support and updates. After the first year subscriptions are £80 (plus VAT) per year.

Getting ahead in the space race