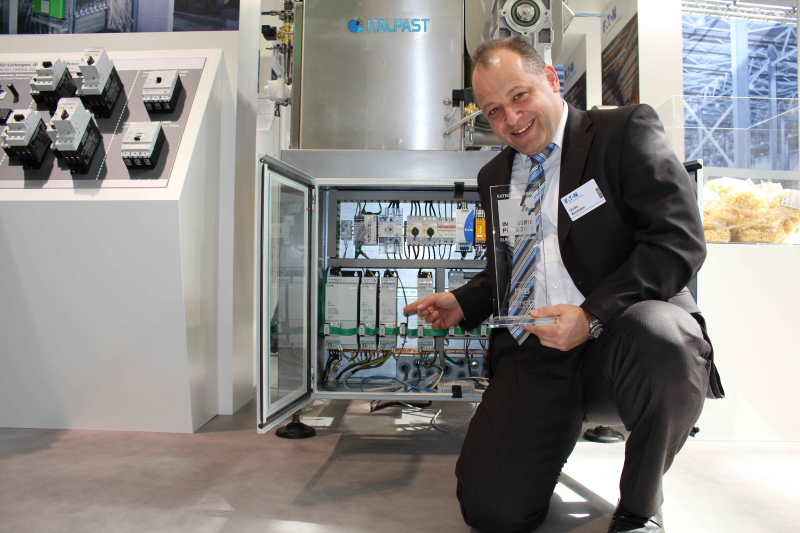 Power management company Eaton has won the Electrical Engineering category of the German Industriepreis 2015 with its new PowerXL DE1 Variable Speed Starter (VSS). Eaton’s VSS combines the benefits and simplicity of a conventional fixed-speed starter with the ability to vary the speed of the motor.

Government efficiency requirements such as those set out in the ErP Directive, combined with increasing levels of machine automation have seen a significant growth in the use of applications with variable speeds. However, conventional variable speed drives are often too complex for these applications, whilst starters don’t provide the option to control speed. The PowerXL DE1 VSS provides machine and system builders with a cost-efficient and highly reliable new device class for motor control that will be particularly useful for helping them to increase energy efficiency in applications where fixed-speed starters were previously used.

The Industriepreis 2015 panel of professors, scientists, industry experts and specialist journalists recognised that the PowerXL DE1 VSS fills this gap in the market, further prompting the decision to present Eaton with the Industriepreis award – which saw a record number of entrants. The award recognises ideas and products which are innovative, production-ready and modern, as well as help users be more profitable and efficient.

The VSSs have been designed for straightforward ‘out of the box’ operation without the need for adjustments or parameter setting. At the same time, users have at their disposal a universal configuration module that allows the most important parameters to be set using only a screwdriver – no keyboard, software or manual are needed. This means they require up to 80% less commissioning time and cost up to 70% less to install than conventional VSDs.

The PowerXL DE1 VSS brings together technical, economic and ecological benefits. The new device is a technological pioneer, creating cost efficient applications and providing simple and efficient support to the implementation of ecological design directives.