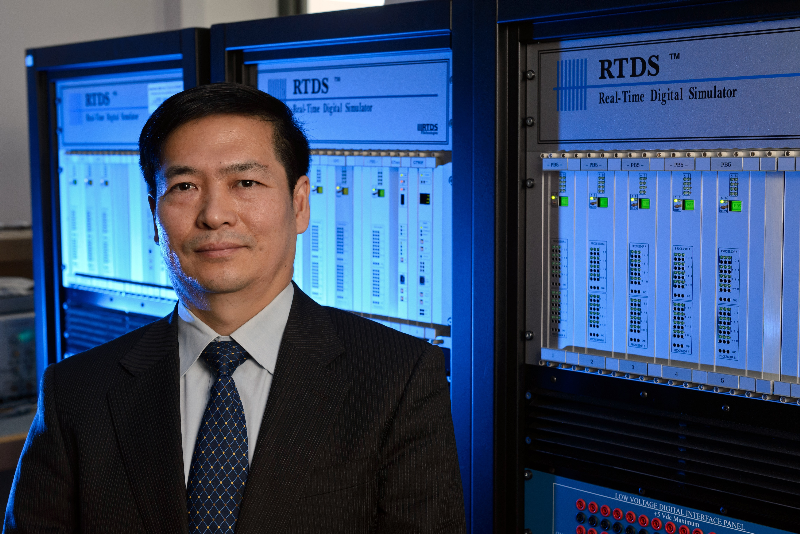 The final barrier preventing energy suppliers making the switch from AC power grids to faster, more efficient DC systems could now be removed, thanks to research carried out at the University of Birmingham.

Electrical engineers, led by Xiao-Ping Zhang, professor of electrical power systems at the University, have developed a way of managing faults in direct current (DC) power systems – a breakthrough that has so far eluded engineers around the world.

The solution, devised by the Birmingham team, is to incorporate the technology needed to control the DC current, into the grid’s AC/DC converter terminals, rather than building stand-alone circuit breakers, which are prohibitively expensive.

Using simple AC/DC converter terminals, the DC current can be controlled and isolated from the AC side. The DC fault current can therefore be converted into AC current and interrupted very easily even by a simple power switch or by a low capacity DC circuit breaker.

It has been patented through Alta Innovations, the University’s technology commercialisation office, and partners are currently being sought to develop the work commercially.

“Nobody has yet thought of using the terminals themselves to control the DC current. It’s a very practical solution to the problem, which will make the DC current breakers much simpler and much cheaper,” explained Professor Zhang.

“The need for DC current is such that huge, multi-billion pound, infrastructure projects are already underway in anticipation of a solution to this problem,” he added. “We believe we have the missing piece of the puzzle that will allow DC power supplies to be adopted worldwide.”

Electricity suppliers have been anticipating the need to switch to DC supply for a number of years: although power systems based on alternating current (AC) have served most of the world’s power systems throughout the 20th century, AC systems are not efficient enough to deal with the many different sources of power that are now being fed into power systems. Offshore renewable energy  systems, for example, prefer High Voltage Direct Current (HVDC) Grids because they are more efficient and can be controlled more flexibly.

Direct current power cables can carry larger supplies of power, and over greater distances. This means the equipment required can be smaller in size and in weight and is also more suitable to transport power from offshore renewable energy sources to onshore power systems. A DC system is also better able to handle and control the fluctuating amounts of power which need to be fed into power grids from these renewable energy sources.

The difficulty with switching to DC power supply, however, is that when faults occur, they are extremely hard to control because the huge flow of direct current is very difficult to stop. In an AC system, by contrast, the current switches direction many times a second. Each time the current passes through zero, there is an opportunity to stop the current and repair any fault.

DC circuit breakers currently developed to repair faults on DC power lines are large and extremely expensive. They work by converting a DC electricity flow into AC, so that the circuit can be broken as the current passes through zero. One device, however, would typically cost as much as a DC terminal – the devices that control the flow of current in and out of the grid.

The Birmingham team has completed a validation of their approach, using an industry-standard real time power grid simulator and they are now actively looking for industrial partners to explore commercial opportunities for the technology.

Smart Tech Live is back!