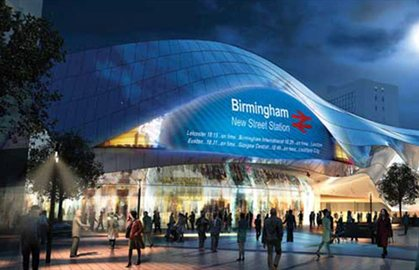 For those that have been travelling in and out of the heart of England’s second city, Birmingham, you will have done well to avoid the sight of the old New Street Station being torn apart to be replaced by a brand new, much larger, design.

With work having started in April 2010, the project is entering its final stages with work due to be finished by early 2015. This latest guest editorial takes a closer look at what’s really behind one of the largest re-construction jobs Birmingham has seen in recent years.

Birmingham New Street is the busiest UK train station outside of London with over 140,000 people using it every day. The station was initially built in 1967 but there is now more than double the designated number of passengers using it, and with that number due to increase the station was in desperate need of a revamp both in aesthetics and accessibility.

The main focus of the redevelopment project is to create more space for users on the platforms as well as providing a modern new concourse with top of the range facilities. As a result of the new design, Birmingham New Street station will be able to handle up to 250,000 passengers daily which is three and a half times as many as it is currently for. There will also be a new 16,000sq.m. external façade to compliment the surrounding area with great design and accessibility.

Birmingham New Street Station manager for Network Rail, Steve Lewis, said: “The new station we are building will have a big impact on the city, and act as a catalyst for regeneration.”

Two years ago a 23,000sq.m. John Lewis store redevelopment was given the go-ahead which has had to be incorporated into the current programme.

The project is estimated to provide over £2bn worth of business in terms of transport and wider economic growth to the region and is being carried out by Network Rail who are working alongside Mace. Currently there are over 1000 construction workers on site working 24/7 in order to make sure that the project is completed on time.

During the course of the redevelopment project the station has had to remain functional for users as it is a key route in and out of the city centre which means that only one platform has been closed at any one time. While this has proved a difficult task to encompass it means that the city has not lost one of its major network links and has still been able to get commuters to their destinations.

With the station redevelopment nearing its conclusion Birmingham will be able to boast one of the most modern stations, both in terms of design and functionality, in the UK. This has led to an enormous increase in demand for UK construction jobs, particularly in the Birmingham area, which has contributed to the industry’s boom over the last 12 months. Various recruiters have seen the effects of the rising demand – for example Birmingham building jobs with PSR, a UK-based recruiter, have seen an increase during the project’s progress.

While new aspects of the station are opening at a staggered rate, and enormous amounts of work have been done, the station’s final unveiling is still in the future – though the reveal of this staggeringly large project’s input is just around the corner.