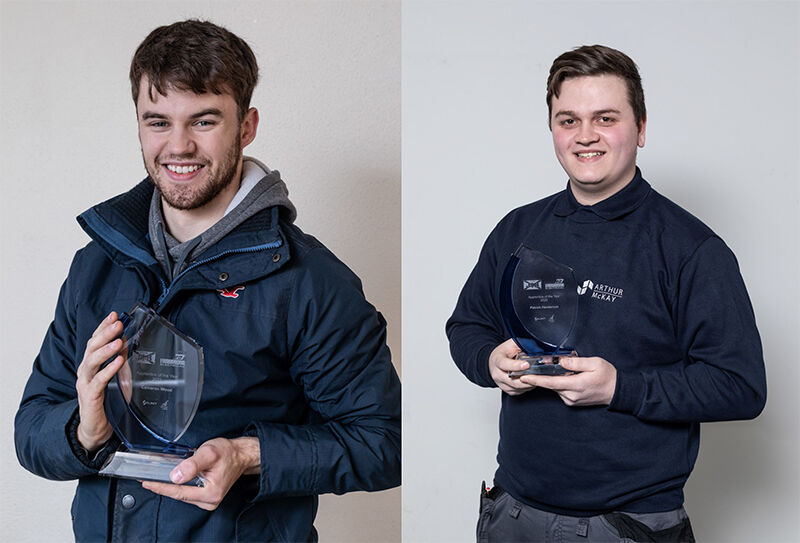 Two young electricians have been recognised for their talent in the Scottish Joint Industry Board (SJIB) Apprentice of the Year awards, sponsored by Edmundson Electrical.

Cameron Wood (pictured left) and Patrick Henderson were presented with their awards and certificates in special ceremonies with their respective employers.

Cameron proudly lifted the 2021 trophy, while Patrick received the 2020 award which had to be delayed due to lockdown. Both also received £500 from the SJIB and £500 from Edmundson Electrical.

Fiona Harper, the secretary of the SJIB, said: “The SJIB Apprentice of the Year awards, sponsored by Edmundson Electrical, celebrate the best new talent in our industry, and both Cameron and Patrick have both demonstrated excellent skill and dedication.

“We were disappointed that we were forced to postpone the 2020 ceremony, but we are equally delighted that Patrick has now been recognised for his exceptional talent.”

Derek Allen, Scottish regional director of Edmundson Electrical, added: “Both winners should be rightfully proud of their achievements, and their employers and college lecturers should also be praised for continuing to help develop the talent of tomorrow.”

Cameron is now a qualified electrician who works for JS Hardie Electrical in Lauder, Berwickshire, after completing his studies at Borders College in Galashiels.

After successfully completing his training, 2020 winner Patrick now works for Atalian Servest AMK in Loanhead, Midlothian, after studying at Forth Valley College in Falkirk.

Contractors have a bright future