A reason for celebration 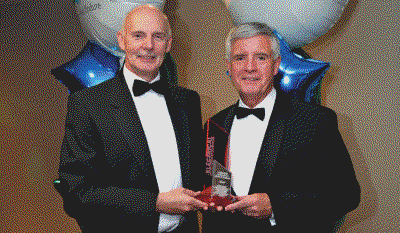 October saw Eaton Corporation celebrate its 100th anniversary since being founded as small axle business in 1911. The company has since evolved into four business groups – electrical, aerospace, hydraulics and vehicle – with customers in over 150 countries.

There was in fact cause for a double celebration at Eaton, as October also saw the company achieve industry recognition at the Electrical Industry Awards.

Winning the award for Innovative Residential/Domestic Product of the Year was Eaton’s PV Switch & Surge Unit, developed in conjunction with Solarcentury. And, significantly, the award for Outstanding Contribution to Electrical Excellence went to Eaton’s trading standards and policy manager, Kevin Harris, who was nominated by Eaton and BEAMA colleague, Alan Birks. He commented, “For more than a decade, Kevin has been a driving force in the battle against counterfeit electrical goods that threaten people’s safety and rob the electrical industry of its rightful profits. It is no exaggeration to say that every single manufacturer of electrical products, and probably every single person in this room tonight, has benefitted from the diligence and passion with which he has gone about his tasks.”

A degree or an apprenticeship: the tough choice facing this year’s students

State of the art development for CEF

Costing the impact of business downtime