A gold rush for VSD installation 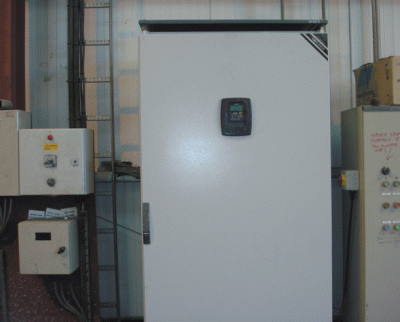 After a gearbox failure had stopped production at Omagh Minerals site in Cavanacaw, Ireland’s only operational goldmine, Ralspeed supplied a 250kW variable speed drive (VSD) system that allowed normal operations at the mine to be quickly resumed

A key feature of the operations of the Omagh Minerals goldmine is a ball mill – essentially a large drum into which the ore is placed along with heavy balls. As the drum rotates, the balls gradually crush the ore into a powder from which the gold can be more readily extracted. Fully loaded, the ball mill at the Omagh Minerals site weighs over 50 tonnes, and it has been calculated that the torque required to start it is in excess of 24,000Nm.

This mill is driven by a 250kW motor, via a 5.8:1 ratio gearbox. However, problems had been experienced in the form of gearbox failures and as a result, Omagh Minerals called in bearing specialist Hayley Group to investigate. The conclusion was that the type of gearbox currently being used was only just adequate for the application, and that fitting a larger gearbox would improve reliability.

Shortly after this conclusion had been reached, the in-service gearbox failed, putting the ball mill out of action. This was an issue in itself, however the best delivery available on the larger gearbox recommended as a replacement was eight weeks and Omagh Minerals was understandably reluctant to have the mill out of service for such a long period.

Experts from the Hayley Group knew that the maximum load on the gearbox occurred when the mill was started and that, if this load could be reduced, a smaller gearbox, which was available on a much shorter delivery, could be used.

The key to reducing the starting load was to replace the direct online starter currently in use with a variable speed drive that would give a smooth controlled start-up with greatly reduced peak torque. However, this solution was only attractive if a suitable variable speed drive system could be obtained quickly.

This is where Ralspeed came in, confirming that it could design, build and supply a panel for this application in just one week.

Service in a hurry

“The Ralspeed guys were as good as their word,” said Mark Jones of Hayley Group. “Because Ralspeed had designed specifically for the application, it was quick and easy to install and commission, which meant that we were able to get it into service without delay.”

With the replacement gearbox installed (albeit of a smaller size than that originally envisaged), and the Ralspeed variable speed drive system fitted in place of the original direct online starter, the ball mill was back in operation in less than two weeks. It has now been working reliably for several months without any sign of distress to the gearbox or other parts of the drive system.

“This is an application that places great demands on the mechanical components in the drive chain,” said Jones, “but, as we’ve seen, these demands have been significantly reduced by the Ralspeed variable speed drive system. This gives us complete control over the rate of acceleration and deceleration of the ball mill drum, thereby eliminating shock loads on the drive system.

“This has turned out to be an effective and convenient solution, not least because of the very fast delivery and excellent support provided by Ralspeed. We are confident that the new arrangement will make the ball mill much more reliable in future and, by eliminating costly breakdowns, it will pay for itself very quickly. In fact, I would have no hesitation in saying that, with this application, Ralspeed has certainly hit the gold standard for Omagh Minerals!”