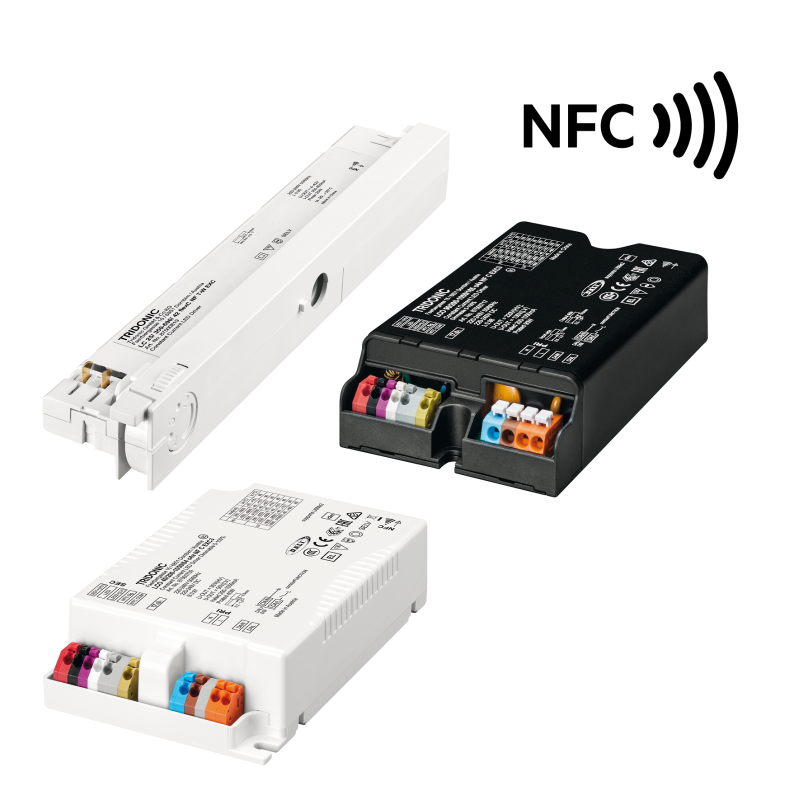 NFC is more commonly known as the contactless payment option in shops and other retail outlets, however, contactless data transfer via NFC is also being used in other areas.  With the integration of NFC interfaces in LED drivers, contactless data transfer is now frequently finding its way into luminaire production.  The correct settings can be transmitted wirelessly to LED drivers with an integrated NFC interface within a few seconds thus saving valuable time and reducing production costs.

To be able to use NFC in the manufacture of luminaires, only one NFC antenna is required in the production area. NFC antennas are available as handheld devices and as NFC interfaces, which can also be installed directly onto workbenches. NFC antennas transmit data via electromagnetic induction to receivers located in the immediate vicinity – in the case of luminaire production, to drivers that are to be programmed with configuration data. For example, the output current, the automatic switch-off of the luminaire via corridorFUNCTION or the dimming level on the driver can be programmed.

Since 2017, Tridonic’s companionSUITE software package has been available as a web-based tool for creating driver settings, programming LED drivers in production and, more recently, for analysing drivers of returned luminaires. This software package is compatible with common driver interfaces such as DALI, DALI-2, one4all and now NFC. Unlike the current standard interfaces, NFC enables the contactless transfer of the driver settings as the driver no longer needs to be connected to the transmission device using a cable. In addition, data transfer does not require a power supply, which means that no measures have to be taken to protect against accidental contact. The new multi-programming function adds another advantage: using NFC, up to 20 drivers can be programmed contactlessly at the same time, making considerable savings in production time.  By using this system, Tridonic has provided a quicker production process as previously each driver had to be handled, connected and programmed individually.

“The immediate advantages of programming LED drivers via the NFC interface, which enables the contactless connection of software and hardware, are obvious. Since a cable no longer has to be connected to the driver and several drivers or even entire packaging units can be programmed at once, time can be saved in this production step. But NFC has other advantages, for example, the driver settings can be quickly read and checked by attaching the device to the antenna, which facilitates quality checking or error analysis,” says Klaus Mohr, Product Manager Lighting Controls at Tridonic.

Setting the standard in cable safety and efficacy for public buildings

C.K Set to Light up CEF Live in June