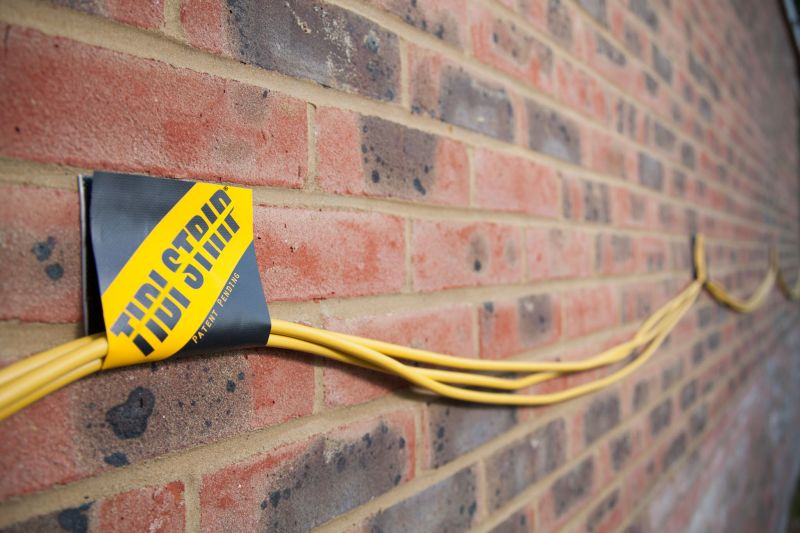 Each year thousands of accidents are caused by trailing cables on construction sites, costing companies and insurance firms hundreds of thousands of pounds worth of compensation. Companies even run the risk of having their sites shut down by Health & Safety Officials if steps aren’t taken to deal with this safety hazard.

Tidi-Cable Founder Perry Coppen was working as a trainee site manager whilst studying Construction Engineering Management at Loughborough University, when he tripped over some cables that were trailing along the floor. He was struck by the idea for Tidi-Strip, and shortly before his 21st birthday filed a UK patent application.

Launching 3rd March, Tidi-Strip® (patent pending) offers a simple and effective way to attach cables to walls, removing the risk of people tripping over them and injuring themselves.

Tidi-Strip® comes in 1 metre units allowing you to cut pieces to the length you need. Simply peel off the wax paper back to reveal the specially engineered self-adhesive foam and stick to any surface. Pull on the grip tab to release the hook and loop fastener, add up to five cables and re-fasten. Once you’ve finished on site, simply peel the product from the wall. Tidi-Cable is so confident that customers will be happy with the product, they are offering a 6-month money back guarantee with each purchase.

Each metre of Tidi-Strip® can hold up to 100 metres of temporary cable and adheres to the wall eliminating the need for screws or nails. The design currently has UK and US patents pending.

The business won the Loughborough University Dragons’ Innovation Award and the Potter Clarkson Intellectual Property Development Award in 2013. It was also featured on the magazine website of the Chartered Institute of Building (CIOB).

Tidi-Strip® has already received 900 pre-orders from some of the UK’s largest construction and house building companies.

Tidi-Hooks® are screwed into the wall and can hold up to nine temporary power cables. (£6.99excluding VAT for a set of 5)

Tidi-Hangers®, which suspend up to ten cables at once, can be hung on overhead features such as ceiling grids, scaffolding and cable trays. (£7.99 excluding VAT for a set of 5)

Tidi-Hooks Lite® are a lightweight version of the original and can hold three cables at a time. (£4.99 excluding VAT for a set of 5)

All products are available to buy at www.tidi-cable.com

Easy to use handheld to measure humidity, temperature, dew point, carbon dioxide or moisture in oil