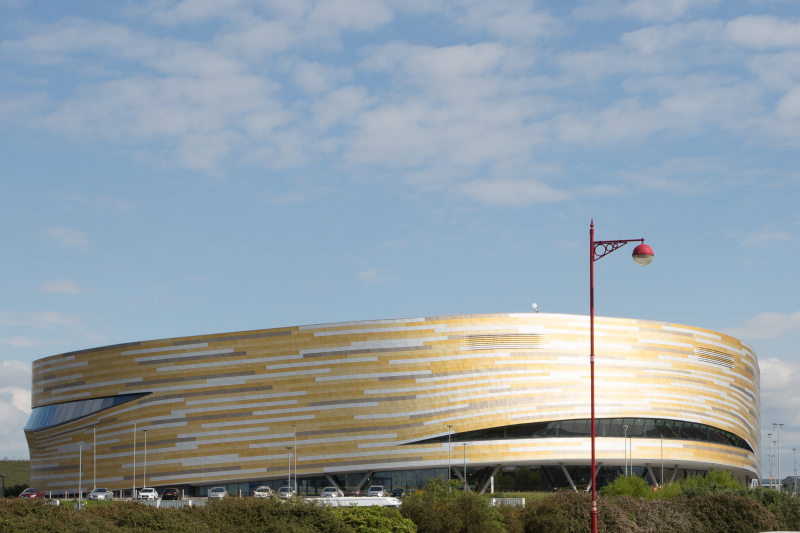 Thorn Lighting has pioneered the use of LED’s for sporting environments and is involved in many prestigious projects. One case in point would be Derby’s iconic Multi-Sports Arena where Thorn’s team provided a variety of luminaires to ensure that the Arena provides a striking, inviting and motivating place to participate in sport and also to visit as a spectator. Compliance with illuminance levels and uniformity were key objectives, as were separate switching levels for the track and multi-use sports areas within the Arena.

Derby Arena is a state-of-the-art, 14,500m² multi-use arena and velodrome that includes a national standard 250m indoor cycling track, a sports infield the size of 12 badminton courts and a fitness centre, café and meeting and conferencing rooms. It can host a variety of sports including badminton, basketball, netball, volleyball and martial arts (all which can be played by wheelchair users). 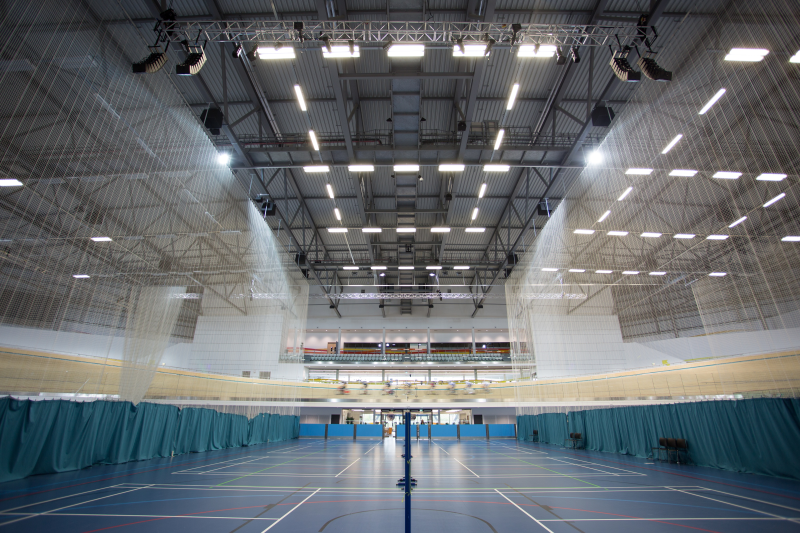 Thorn’s Mundial 1KW and Troika 400W floodlights illuminate the velodrome track, which also benefits from three light switching levels of 600 lux, 300 lux and 100 lux to efficiently meet the lighting requirements for its varying uses. Mundial is a high power floodlight for sport and large area illumination applications while Troika is an asymmetric ‘flat glass’ floodlight with four different light distributions for each lamp option and a broad selection of attachments.  Thorn’s luminaires provide the required colour temperature of 5600K, a colour rendering index of 90 and uniformity level of 0.76 and all of the track floodlights are tilted no higher than 65° for good glare control.

Titus Sport, a robust dedicated sports hall luminaire with T16 (T5) fluorescent lamps, has been used to illuminate the infield sports area, providing an illuminance level of 500 lux and uniformity ranging from 0.8 to 0.95. The infield area also has separate switching to accommodate the volleyball, basketball and badminton courts, which is positioned to accommodate the demands of each field of play and sporting activity, ensuring lighting is appropriate and comfortable for players.

Another project recently undertaken by Thorn involved providing a lighting system for Brentford Football Club that came close to meeting the demands of the premiership. When Brentford reached the Premier League playoffs for the first time, the club decided it was time to increase the stadium’s electrical capacity and lighting levels, which saw an average illumination of just 598 lux. The Club set a target for the new lighting at its ground, Griffin Park, to achieve a pitch illumination level 20% above Championship standard with improved the colour quality that was particularly important for TV broadcasting. 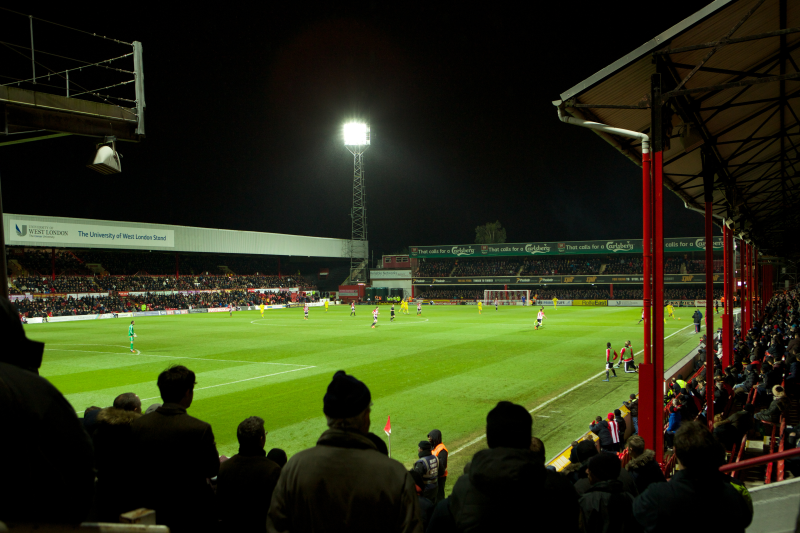 With a new Brentford FC Community Stadium planned to open in 2018, a cost-effective solution was required that would conform to Championship rules and regulations but also take into account the remaining lifespan of Griffin Park. Given the layout and design of the stadium it was decided that an increase in lighting levels, initially to a minimum of 1000 lux at pitch level, was needed but the four existing floodlight towers had to be utilised.

The outcome was remarkable with uniformity of 0.8 (a 33% increase) and, instead of the average 800 lux required, the Thorn luminaires achieved close to 1200 lux which will provide the basis to have a total constant light cover throughout the field of play with minimal shadow.

In terms of colour, the lighting complements everything around the pitch activity and game, which has been evident on numerous live broadcast productions. The reaction from staff, fans, players, media and photographers is that the field of play looks excellent under the floodlights with some people even asking the question why it took so long.  “Thorn provided the schematic plans to assure the football club that we would achieve the objective. The expertise that Thorn brought to the table then provided us with the best Thorn light fittings so that the. The project was delivered on time and within budget, achieving far better results than Brentford FC thought possible.