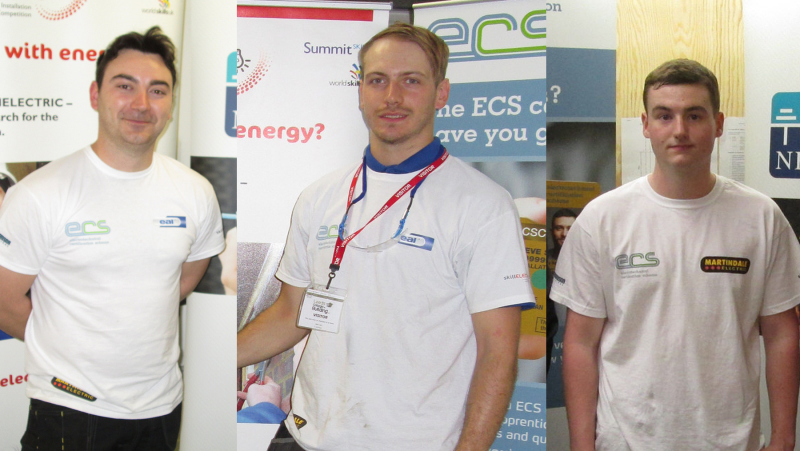 Top skills have been on display around the country at the English regional SkillELECTRIC heats. Three talented young electricians have topped the table at their respective events and now have a chance of progressing to the UK final to be held later this year.

The regional winners are:

Judges scored Yordan, Mark and Shaun most highly in a task that involved a complex PVC conduit and trunking installation, enclosing PVC single cables for a socket outlet and two lighting circuits. Competitors were judged against tough criteria including installation quality, positioning of equipment, function and inspection & testing.

The highest scoring competitors from the event now have the chance to compete to be named SkillELECTRIC UK champion at the UK grand final in November. The event is held at the prestigious Skills Show at the Birmingham NEC, the UK’s largest skills and careers show with over 80,000 visitors.

“It’s been fantastic to see how keen all the competitors have been to take part,” said Jon Dicken, technical development manager for NET. “As we’ve travelled around the country, you can really notice the quality and performance of those competitors who have taken the time to prepare fully before the event. Now we’re at the end of the English and Welsh heats, I’d also like to thank the host colleges and their staff for all the help in setting up and running the events.”

Mick Tuff, representing the ECS, added: “It was pleasure to attend the SkillELECTRIC competition and witness the apprentices taking part, knowing that these individuals will become the next generation of skilled professionals entering into the electrical industry.”

Competitors from the 2017 SkillELECTRIC event could also potentially go forward and represent the UK in Russia during 2019 at the biennial WorldSkills event – the world’s largest skills competition.

Turning up the heat at Sensing Technology 2012