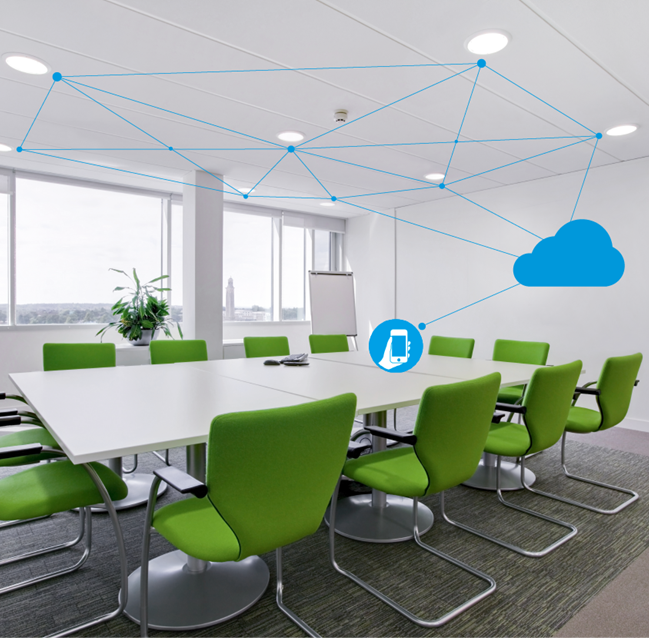 The ‘Internet of Things’ (IoT) will potentially enable electrical engineers to achieve much more with the lighting infrastructure of buildings. Karl Jonsson of Tridonic explains

We are now very familiar with what might be called the ‘Internet of screens’ and the connectivity that goes with it. It’s not just computers that are able to talk to each other; this communication also extends to smartphones, tablet PCs and televisions. Devices are connected to the Internet and, via the Internet, to each other.

The next stage will include devices such as heating and air conditioning systems, domestic appliances and many others – all exchanging information to enhance performance.

At the heart of these developments is the trend of including wireless sensor networks in machine-to-machine (M2M) communication. These developments can revolutionise companies’ value chains and enable new service offerings that benefit everything from shops to office buildings and the management of whole towns and cities.

So what is the significance of this for electrical engineers?

We are already seeing a convergence in building services where lighting, HVAC and other building controls are gradually moving away from legacy standards and proprietary implementations to Internet-based standards.

Connecting to a common Internet Protocol in this way enables lights, sensors and actuators to form a smart and connected lighting system and can become a part of the IoT eco-system. The system can then contribute to a sustainable and energy-friendly environment.

Predictions suggest 50 billion connected devices by 2020 – an exciting prospect but also one that presents a major challenge. All of these low-powered devices will have to function for years without being recharged and, at the same time, submit data at a high frequency rate. Clearly an infrastructure is needed to solve this challenge.

Devices are typically connected using a range of protocols in isolated systems. This results in the use of multiple wiring layers – a situation that is far from ideal. Clearly a more efficient and cost-effective infrastructure would supply a low-power network, be present inside and outside the building and allow all devices to connect using a common, standard protocol.

Lighting networks are the obvious choice, as they provide a dense network both inside and outside the building, covering the entire facility. With the growing use of LED lighting, such networks are increasingly digital and connected to a power source.

What makes this approach even more viable is that lighting networks already collect useful data, such as occupancy, through luminaires and networked sensors. This data is currently only used for lighting control but in the next step it can unleash much more value when being deployed outside the lighting world. An obvious example is improved visibility of occupancy patterns that the end client can use to enhance the management of their building(s). 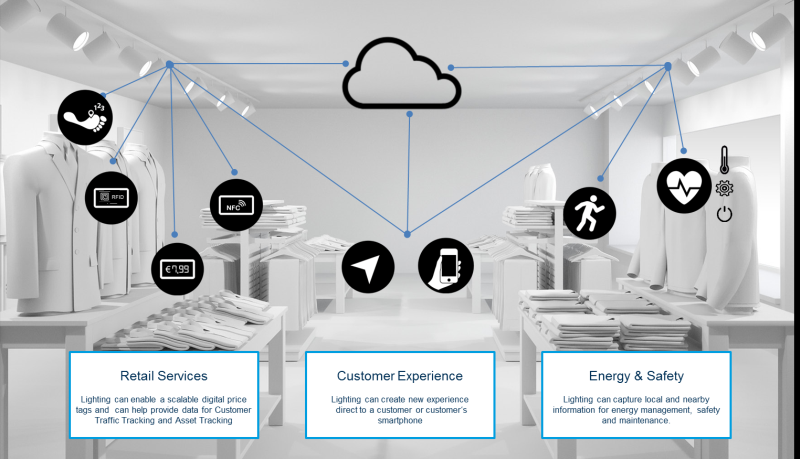 Connecting our lighting to the Internet began in the consumer market with so-called ‘smart bulbs’, enabling users to take lighting further than the wall switch and unlock features such as creating scenes or tuneable white etc.

In the professional market a new generation of connectivity allows lighting to support new features and services that haven’t previously been within reach, giving electrical engineers, lighting designers, architects and service providers a powerful IoT toolbox.

The principle of using occupancy data for smarter management encompasses a wide range of potential applications including retail environments.

Retailers can now monitor the flow of customers accurately and arrange their merchandising accordingly, shoppers can be can be guided to their selected products using an indoor navigation app on their smartphones and customers can summon assistance from store staff via the app, with the tracking functionality via the lighting network.

The technology can also be used to improve resource management to avoid out-of-stock situations.

In other types of premises, a smart and connected lighting system could underpin a dynamic and context-aware building where settings change dynamically based on a combination of sensory inputs like motion, heat, illuminance, humidity and orientation of objects. IoT sensory data can also contribute to intelligent controls, adjusting shades and window openings for optimised sustainability.

On the practical side, IoT devices are typically connected through wireless and wired protocols such as Ethernet. However, due to the power requirements and size constraints of WiFi they will ultimately communicate at a common layer to enable cross industry features and communications.

Thanks to collaboration between lighting controls companies, architects, lighting designers, IT managers and installers there is now real progress towards making Internet-connected lighting a reality that takes lighting way beyond just illumination.