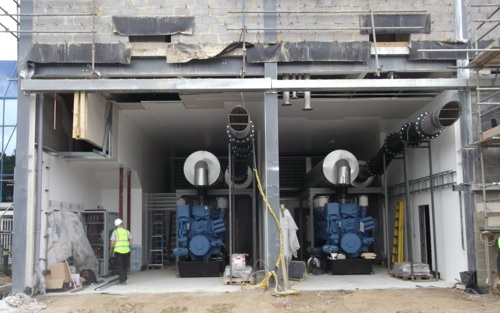 The telecoms company had expanded its data centre operation, which necessitated it building a bespoke Energy Centre to house the new generators. The new servers needed UPS and generator power support to ensure continuity of service in the event of a power outage.

Eight months in planning and implementation and involving a team of 13, shentongroup has supplied two 3,200kVA standby generators, which together with the other 19 generators on-site now provides a total of 27,900mVA of standby power. shentongroup needed to plan the project to fit around the customer’s building design, and installation work had to be undertaken out of hours and also whilst the building was still being constructed.

The generators have been installed on the ground floor, in separate rooms, and have been designed so that a further two generators can be added at a future date. Should the necessity arise, both generators are capable of providing prime power at 2,920kVA with a 0.8 lagging power factor and with a ten precent overload capability for a minimum of one hour. shentongroup has also provided fuel tanks with sufficient capacity to enable the generators to run for eight hours at full load.

As the Energy Centre is situated in an urban environment, the telecoms company stipulated that the generators should have the necessary attenuation so that they do not exceed sound level of 65dBA at one metre. The generator rooms are therefore equipped with inlet and outlet attenuators with motorised louvers that have been sized to provide the appropriate combustion and air cooling airflow requirements.

Remote Alfa Laval radiators had to be craned onto the roof of the new Energy Centre building to cool each generator. The radiators’ height is less than that of the surrounding louvres and they operate at noise levels of less than 65dBA at one metre. These are connected to the generators by two cooling circuits per generator in six and three inch welded stainless steel pipework.

Further project work involved shentongroup installing two 5,000A Air Circuit Breaker panels (ACBs). Both panels are adequately ventilated to allow continuous full load operation in the maximum ambient temperature likely to be present in the generator house during prolonged ‘on load’ runs. All internal connections within the panels are by means of 5,000A copper busbars, adequately spaced to allow for loadbank testing. Together, a total of 4,850 metres of cable was used, which is equivalent to 3.2 miles. Load bank testing was carried out using 3,500kVA Resistive/Reactive loadbank and all the necessary step loads and cold start tests were performed.

Commenting on the project , the telecoms company stated, “shentongroup always responded quickly to any queries, which made things much easier, as most peopled need to be chased. We were very comfortable working with them and very impressed at their willingness to work at a time that fitted with our schedule.”