Second submarine power link to be developed across the Dardanelles Straight 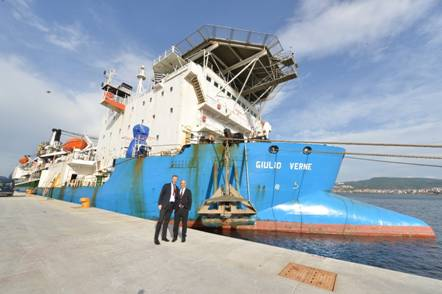 Prysmian Group, working in the energy and telecom cable systems industry, has been awarded a contract worth a total of around €64m by the Turkish utility TEIAS (Turkish Electricity Transmission, one of the largest among the ENTSO-E members) for the design, supply, installation and commissioning of the second high voltage submarine power cable link between Europe and Asia across the Dardanelles strait in Turkey.

This second link across the Dardanelles will complement the interconnection that Prysmian Group is currently executing along the same route in these days under the first contract awarded by TEIAS in September 2012, and will play a strategic role in order to complete Turkey’s power transmission grid and to ensure reliable and cost-effective power flow from the Asian generation sites to the country’s European main consumption centres including the congested Istanbul area and closing the ring around the Marmara Sea.

“This project reconfirms Prysmian’s undisputed leadership in the submarine cable systems industry as a truly reliable and dedicated partner in the execution of turn-key complex projects,” stated Massimo Battaini, Prysmian Group’s senior vice president energy projects. “The first Dardanelles link, which is currently carried out successfully by the Group, represents a milestone in the cables industry as it is one of the first AC 380 kV submarine cable links using XLPE insulated cables, in the world. This second award by TEIAS is a tangible sign of the Group’s strong and acknowledged reputation and of the trust of the market”, he added.

The link comprises a double AC power transmission circuit of approximately 4 km with a rating of 1000 MW for each circuit between the substations of Lapseki (Asian side) and Sütlüce (European side) across the Dardanelles strait. The 380 kV XLPE insulated cables will be manufactured in Prysmian’s production unit based in Pikkala (Finland), one of the Group’s excellence centres for the production of submarine cables and installation will be performed with available resources. Commissioning is scheduled for the first half of 2016.

With the goal of continuing to meet the needs of high potential growth markets for the development of new infrastructure, the Group is moving ahead with a major investment programme to expand production capabilities in its plants based in Finland (Pikkala) and Italy (Arco Felice). Furthermore, the Group has strengthened its portfolio of connections to mainland grids and inter-array connections between turbines, also thanks to cables manufactured at the Drammen plant in Norway and to installation services provided by the cable laying ship Cable Enterprise, which will soon be leaving docks after extensive upgrade from dumb barge to self-propelled DP2 vessel.